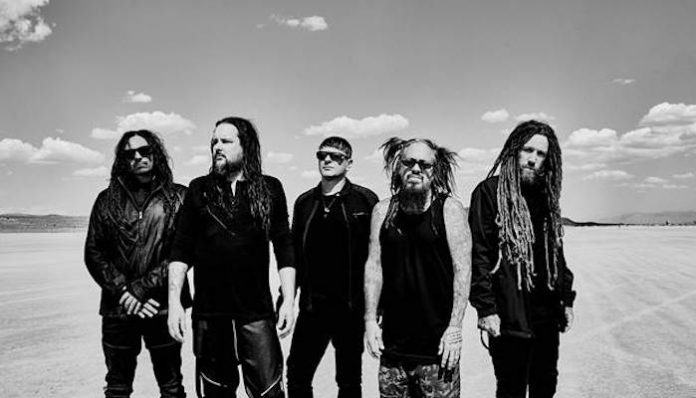 Korn are delivering their 13th album, The Nothing, appropriately on Sept. 13. The effort marks a sonic shift for the band, one they’ve been discussing over the past year or so.

In May 2018, Jonathan Davis was in the midst of gearing up for the release of his debut solo album, Black Labyrinth. During an interview on the new venture, the vocalist revealed bandmates James “Munky” Shaffer and Brian “Head” Welch were already at work on the next Korn album, the follow-up to 2016’s The Serenity Of Suffering.

Read more: Green Day’s new song is like “a unicorn falling out of the sky,” Billie Joe. Armstrong says

A few months later, Davis revealed he had listened to what was being produced thus far, stating it had some “really cool grooves,” and he was already more excited on these demos than the ones in 2016.

“I’ve listened to a bunch of stuff,” he says. “There’s been really good ideas, really cool grooves. It really doesn’t start taking place until I get there and glue all the shit together with the arrangements and put my vocals on it.

“But they’re working with different producers, and we’re gonna do the record, and we’ll see,” he continues. “I’m really excited for it. It doesn’t suck. I know that. I’m not going, ‘Go back, please.’ I’m more impressed on these than I was with Serenity Of Suffering, so…”

The following month, drummer Ray Luzier confirmed the band started tracking the new record and later had to clarify a release date was not yet set. Davis explained the wait, revealing that the band were taking their time with production on what was described again as a very “groove-oriented” release.

Read more: Korn to rock virtual concert amid hordes of monsters in ‘AdventureQuest’

“It’s going great,” Davis says. “We’re recording in Nashville, and I’m gonna start working on some stuff when I get home. And when it’s done, it’s done. It’s not like records in the past. We’re taking our time on this one. And the stuff that I’ve heard that we’re recording is very groove-oriented. It’s very intense. It’s gonna be a good record. I’m really excited to get home and start singing on it.”

As 2018 came to a close, Head revealed two powerhouse forces helping them with production—producer/Goldfinger frontman John Feldmann and blink-182 drummer Travis Barker—for the album he also confirmed had a fall release. The band returned the favor with Head appearing on Barker’s collab EP with $uicideboy$ that dropped in May.

“We actually wrote with John Feldmann, too, for the demos,” Head says. “Travis Barker laid the temporary drums for some, and that was cool. We’ve known John Feldmann since ’87—he was in Electric Love Hogs. So we’re writing with different people. We grabbed [producer] Nick Raskulinecz, and he’s very hands-on and such a fan of music. It’s not a job or a gig to him.”

Pieces of the 13th album puzzle kept filling in with Head revealing fans will be “pleasantly surprised” with what they’ll hear, and the finished album is “so special.” Meanwhile, Davis revealed he went “full-on Queen” with his vocals as the ’80s icons influenced the sound.

The band finally launched their teaser in June, requesting fans sign up on their official site. The following week, they shared the first single, “You’ll Never Find Me,” followed by a sci-fi centric video the following month.

Last month, Korn shared their next single, “Cold” alongside an animated video followed by final prealbum release “Can You Hear Me” earlier this month.

Check out the full stream marking their 13th release, The Nothing, below.

Korn have one remaining show announced this year at Sacramento’s Aftershock Festival with tickets here. The Nothing is available now via Roadrunner, and you can check out the full tracklisting below.