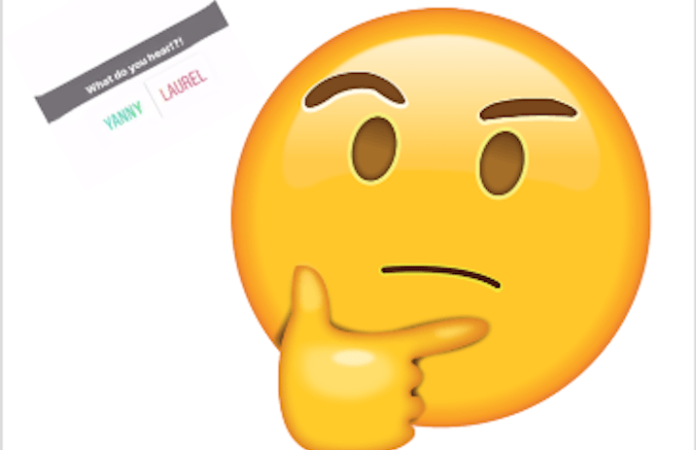 Remember three years ago when everyone fought about whether a dress was white and gold or blue and black? Well, the internet has officially found something else to argue about—“Laurel” or “Yanny.”

The latest divide among users on social media is over an audio file of a robot voice speaking. People can’t seem to agree whether the voice is saying “Laurel” or “Yanny.” You can listen to the clip below.

Roland Szabo, a high school student from Lawrenceville, Georgia, is the original instigator of the debate, according to the New York Times. Szabo was using a vocabulary website that had a feature where a recorded voice would read words, and this clip was one of them. His peers disagreed about what the voice was saying, and one of his friends turned it into an Instagram poll.

The debate really took off when YouTuber Cloe Feldman tweeted a clip of the audio to her following. Since then, it’s nearly impossible to avoid on social media.

Everyone is weighing in on the debate, including some of our favorite musicians. Check out what some of them are tweeting about it below.

The debate appears to be causing a divide in blink-182 mainstay Mark Hoppus’ family.

What do you hear?! Yanny or Laurel pic.twitter.com/jvHhCbMc8I

Liam Payne seems pretty adamant that the voice is saying “Laurel” in this video posted on Shazam’s Twitter account.

Do you hear what @LiamPayne hears?!?! #Shazam Laurel vs. Yanny to vote now!!! #Laurel #Yanny pic.twitter.com/B03TdF5ao4

Alex Gaskarth of All Time Low was really enjoying making jokes about the feud on his Twitter account.

Everyone just stop what you’re doing, go outside and take a deep breath and remember that no matter what you heard, that dress was WHITE AND GOLD !!!!

Set It Off used the phenomenon to plug one of their records. Well played.

Some people hear laurel, some people hear yanny. All we hear is “Upside Down” the critically acclaimed record from popular musical artist Set It Off.

Kings Of Leon’s Jared Followill had a change of heart about where he stood on the matter.

Started off as a Yan-man. Now I’m a Laurel-lord and I can’t go back.

Lil Aaron seemed fed up with the trend, but also had a theory about how people can hear both when listening to the clip.

holy fuck i hate this https://t.co/50PMv2MohZ

it says both. yanny is high laurel is low. its creepy af tho.

The Ready Set kept their answer to the debate pretty short and simple.

Sydney Sierota of Echosmith made her own poll to see what her followers thought, and “Laurel” has the lead with 57 percent of votes.

Multiple people and outlets have created polls to settle the debate, but the answers seem pretty split. What do you hear when you listen to the clip? Let us know in the comments below.