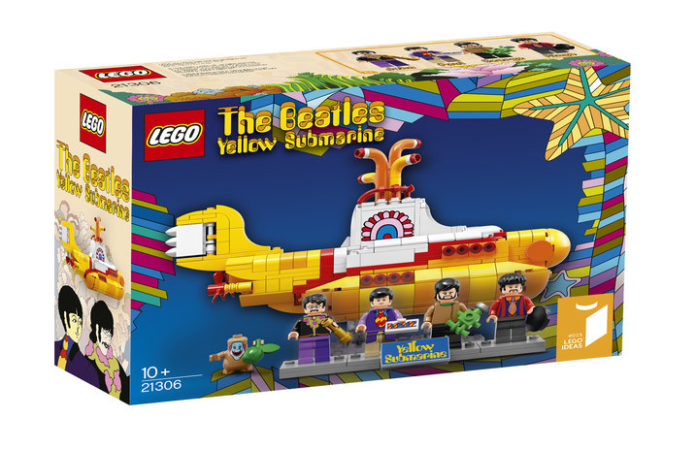 Thanks to LEGO Ideas brilliant crowd sourcing platform, people around the world can submit proposals of subjects they would like to build using the iconic colored bricks. One of the coolest of these ideas that has been recently been confirmed for production is the Beatles' Yellow Submarine set, honoring the classic tune and 1968 film by the legendary musicians.

The brightly colored underwater vessel will come with 550 pieces, including John, Paul, George and Ringo figurines, as well as Jeremy, the other character from the movie. It will retail at $59.99 here in the states, and be available in stores beginning on November 1.

Read More: There’s a metal cover of “Everything Is Awesome” from ‘The Lego Movie’—listen

The designer behind the LEGO reconstruction, Justin Ramsden, said that he initially enjoyed how both the Beatles and LEGOs inspired so much creativity.

“I watched the film when I was younger and was really inspired by how it oozed so much imagination—comparable to how I view LEGO elements. I'm also a massive fan of the Beatles having grown up with their music all my life so to see the Beatles in LEGO form is a dream come true.”

Kevin Szeto, who had the idea to recreate the band as the famous toy, said he really wanted to pay homage to the band with the concept.

“As an amateur musician and songwriter, I have always been drawn to the music of the Beatles. The creation of the Yellow Submarine model was really my way of showing my affection for the Beatles, as well as trying to pay a small tribute to the Beatles phenomenon. The Yellow Submarine is bright, fun, and colourful, which also made it a good subject to translate into LEGO form.”

Read More: These LEGO shoes would’ve saved you a lot of headaches as a child

Below, you can check out the cool promotional video, in which the Beatles travel underwater to battle a sea monster, with the scene replicating the classic '60s style featured in the film.