Less Than Jake are back with their first new music in three years, “Lie To Me.” The track marks the follow-up to their 2017 Sound The Alarm EP.

As if a new song wasn’t enough, the ska legends are also announcing a new album titled Silver Linings set to release later this year as the start of their new era.

Read more: This fan just broke the record for most portrait tattoos of one musician

Less Than Jake began teasing that something was on the way earlier this week with what would be revealed as a section of the Silver Linings artwork.

As promised, 24 hours later, the band shared the news of the upcoming album, which will be released Dec. 11 via Pure Noise Records. Along with the new single, the band also dropped a fitting music video.

We're so excited to announce our new record, 'Silver Linings'!! Check out the brand new video for "Lie To Me" and get your limited pre-order merch here: https://t.co/ZBEsqOFvUH . 'Silver Linings' is out everywhere on December 11th, 2020!!!!!! pic.twitter.com/oJzlPiEvRH

As the follow-up to 2013’s See The Light, Silver Linings will mark their ninth album since their debut in 1995 with Pezcore.

“It’s still so freaking exciting,” bassist Roger Lima says of their years making music together. “After decades of working on songs together, we still love it, and with our new drummer Matt Yonker, we feel reignited and refueled. Personally, I feel that this is the first step of a new era for the band. While the music feels undeniably Less Than Jake, the flow of the tracks and the attitude of the horns and lyrics have a freshness to them and I look forward to sharing these songs with our amazing fans.”

The album will be their first since founding member Vinnie Fiorello parted ways with the band. Lima shared the news in September 2019 nearly a year after Fiorello took to the band’s Facebook to announce he would remain a member but no longer be touring with LTJ.

“Love it or hate it, Less Than Jake is entering a new era,” Lima tweeted. “We have had a new drummer for just shy of a year, and the next album is being written without our old lyricist/drummer. There seems to be confusion on the matter, and I hope I can clear up any questions #newera.”

Fiorello has since launched multimedia project the Inevitables, which brings together comics and ska. Together with Westbound Train frontman Obi Fernandez, the group released the first single “Ft. Lauderdale” in August.

Now, Less Than Jake are also looking to the future with the addition of Matt Yonker.

“We made a new record! Our first full length with our new drummer, Matt Yonker, and it sounds amazing,” vocalist/guitarist Chris DeMakes says. “More vocal hooks than a tackle box, horns galore and that bombastic and upbeat energy that we’re known for. We didn’t try to reinvent the wheel with this one, it’s still undeniably Less Than Jake. Just a bit punchier and in your face. We can’t wait for our fans to hear it!”
Preorders for Silver Linings are available here, and you can check out the new video along with the full tracklisting below. 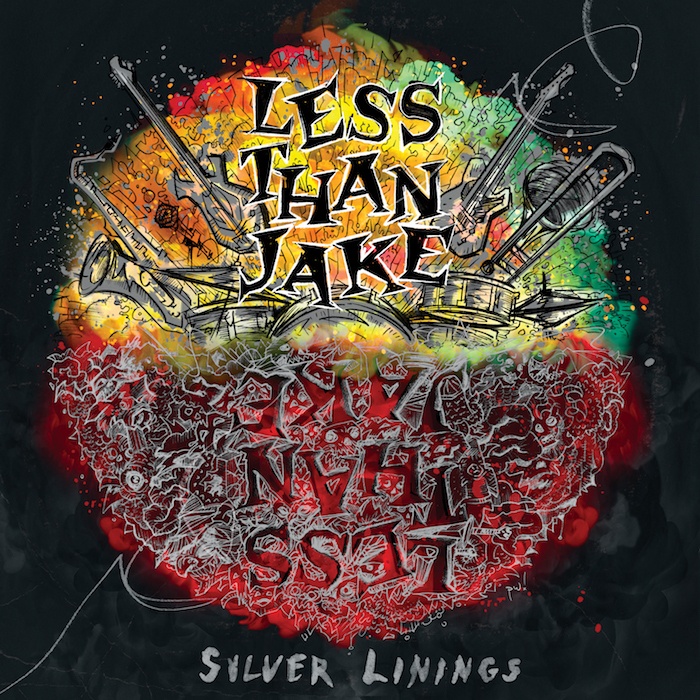