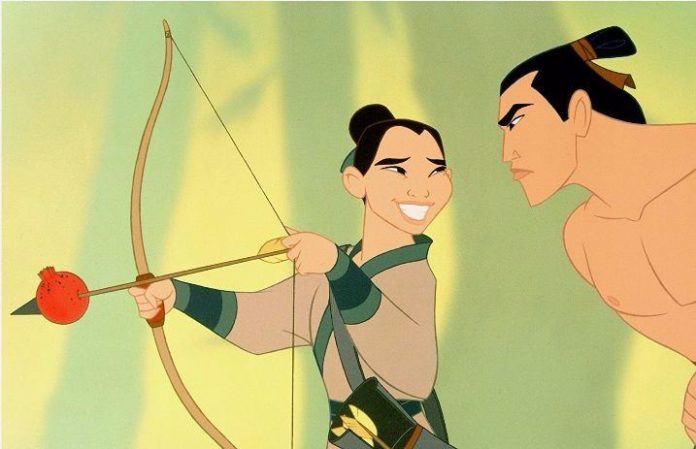 Fans have been eagerly waiting for Disney's live-action adaptation of Mulan, but you might want to brace yourself for some heartache Mulan fans: It doesn't look like Captain Li Shang will be making an appearance.

For those who don't remember who Captain Li Shang is, the captain served as a warriror and Mulan's love interest in the 1998 animated film. We all shipped the two before we even knew what shipping was, and that makes the news of his absence in the film that much worse. Per a report from Huff Post, Mulan is expected to have a love interest named Chen Honghui, who wasn't present in the original film.

As the report notes from a casting call that was released, this new love intest will apparently be an army recruiter who wants to be the “best soldier in human history.” During this time, Mulan, who is dressed as a man, is set to become his biggest rival and as noted, it isn't until her true identity is revealed that “his intense feelings of rivalry turn into something very different, something like love.”

Of course, the news was outraging to fans of the movie. While we don't want to see Mulan with another love interest, there's a more underlying problem with the change of character. As many Twitter users have noted, taking Li Shang's character out of the movie also means taking out the film's only bi-sexual character (as many fans theorized Shange being a LGBTQ character due to his strong relationship with Mulan's male persona, Ping.)

saddened to report it’s basically been confirmed that li shang will not be in the live-action mulan.

the mulan casting call has been confirmed to be accurate. donnie yen was cast as “commander tung,” who is in the description for “chen honghui.”

@Disney hi, that chen honghui guy that you’ve made to replace li shang is an awful character. it makes other people think that guys will only be kind to girls and will shame their fellow guys just to feel superior. li shang is a better leader since he was actually teaching them.

since li shang THE bisexual king will not be in the mulan live action and instead they're introducing that new problematic character that bullies her up until he finds out she's a woman i don't care about it anymore and i hope it flops pic.twitter.com/HCuL3QivhV

Things have been pretty tight-lipped about the upcoming movie, but there have been some major news that has broken out in regards to the film.

While things have been quiet, we do know that Chinese actress Liu Yifei, also known as Crystal Liu, who is set to play the female warrior, Mulan will be co-starring in the film with Rogue One: A Star Wars Story’s Donnie Yen. In a report by Deadline, Yen has been cast to play Commander Tung, who will be Mulan’s “mentor and teacher.”

It was also previously reported that the that the live-action flick won’t have any music. “From what I understand, no songs right now, much to the horror of my children,” director Nick Caro said. While there may not be any music, yeah we’re slightly freaking out about that too, the movie won’t be too boring. “It's a big, girly martial arts epic. It will be extremely muscular and thrilling and entertaining and moving,” Caro says.

Reports also show that the upcoming adapatation is now scheduled to be released on March 27, 2020, rather than the original release date that was planned for Nov. 2, 2018.