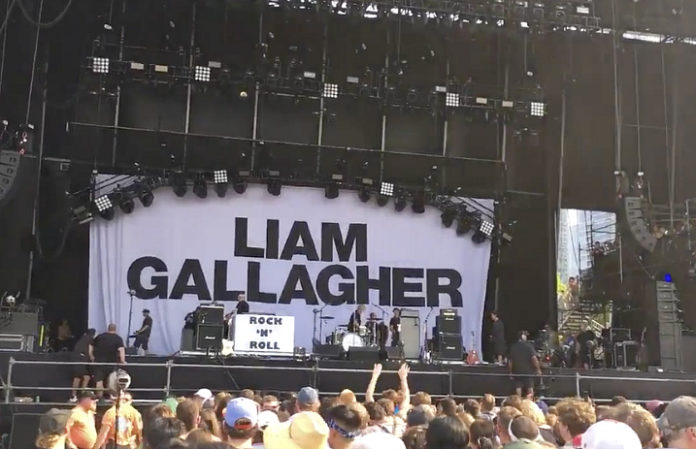 Although Twitter believed that the “I love you Noel” sign in the crowd is what caused the singer to storm offstage, Liam just shared a tweet saying it was instead that his voice was “fucked”:

Sorry to the people who turned up for the gig in Chicago lollapalooza had a difficult gig last night which fucked my voice. I'm gutted LG x

Ah, Liam. The former Oasis singer—and British icon known for his unexpected (yet kind of expected) actions—just let down plenty of Lollapalooza fans after storming offstage after playing 20 minutes of his 60 minute set.

See the footage of Liam Gallagher storming offstage below.

According to fan footage at the festival, Liam left midsong, and once his band finished the song, they walked offstage, too. See a video of what went down below. (And note that you'll hear plenty of fans booing.)

Holy crap. @liamgallagher just left in the middle of a song. His band finished the song and left too. What??? #Lollapalooza2017 pic.twitter.com/cua9nclijW

No one is certain about exactly why he left, but speculations say that the “I love you Noel” sign in the crowd is what upset the singer:

.@liamgallagher left 3 songs into his set because someone was holding a “I love you Noel” sign lmao pic.twitter.com/EnWpplvm2E

Liam Gallagher apparently storming off stage at Lollapalooza because someone had I love u Noel sign, jesus christ man

Of course, Lolla-goers were not happy being let down by Liam, and the Twitter world is fired up. See some of the responses below:

Liam Gallagher just walked off after only 20 minutes.
People are chanting “Fuck Noel” to try to get him to come back.#Lollapalooza pic.twitter.com/OgYFw0VdSa

Liam Gallagher and band just exited stage after playing 20 minutes of what was scheduled to be a 60 minute set. Tea time backstage? #lolla

Got the whole Liam Gallagher/oasis experience. A few oasis songs and a Gallagher storming off stage #lolla

Liam Gallagher walked off #Lollapalooza after 3 songs and absolutely no one should be surprised.

4 songs in and Liam Gallagher bails at #Lollapalooza. Where's Noel when you need him? pic.twitter.com/k51w2GTd2Q

What are your thoughts on Liam's Lollapalooza stunt? Let us know in the comments below!