Robert's design was picked to be a part of the movie's marketing campaign.

Life Of Agony‘s bassist, Alan Robert, designed a poster for the upcoming Conjuring spinoff, the Nun, and it’s seriously scary.

Leading up to the release of the film, that’s out now, New Line Cinema and Warner Bros. Pictures created an “art activation campaign,” calling for artists around the world to come up with exclusive designs inspired by the film.

After receiving almost 2,000 submissions, only seven pieces were selected to be featured in the film’s marketing campaign. One of those selected was from Life of Agony’s bassist, Alan Robert.

Robert’s design, that can be seen below, was selected to be Dolby Cinema’s exclusive poster for the horror flick.

Check out Alan’s artwork below! 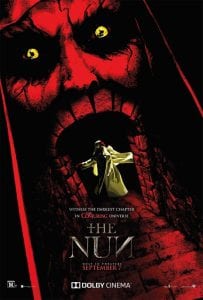 The first trailer for The Nun officially dropped a few months ago, and it is pretty scary.

Set to be a prequel to the other four films in the franchise (which includes The Conjuring and Annabelle films) the film will star American Horror Story star Taissa Farmiga, who just so happens to be the younger sister of Vera Farmiga aka Lorraine Warren in the Conjuring series.

The Nun will have you “praying for forgiveness” when it hits theaters on Sept. 7!

Are you excited for the new horror flick? Watch the trailer for it below and let us know what you think of the next chapter in the Conjuring franchise.