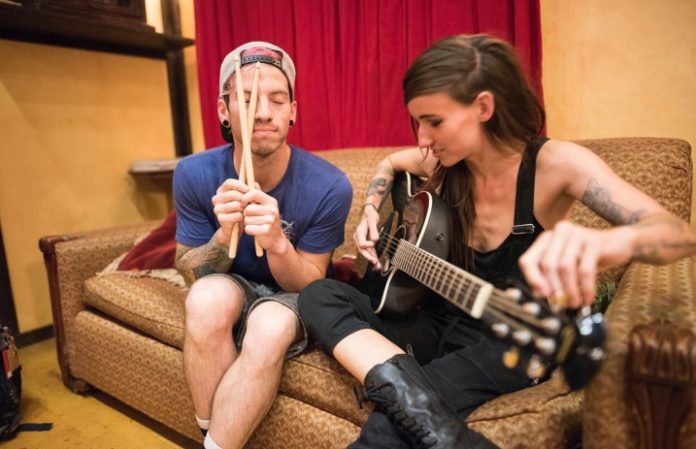 Despite Lights' Skin & Earth being released nearly two weeks ago, we're still listening to the album over and over… and now we know just how that collaboration with Twenty One Pilots' Josh Dun came to be on the track, “Savage,” thanks to the Rock Sound podcast!

Find out how below!

It seems that, considering this is Lights' fourth album, the singer is gaining more confidence in her abilities which is allowing her to branch out and take more risks in the creation of her music.

“In the past, not in a negative way, I've overcontrolled the cohesiveness of the project and made sure everything sounds a certain way and this time around, I really freed myself to expand into sounds that I've never experienced and expand into beats I've never written to.”

Lights worked on both the album and comic series concurrently, creating a totally immersive world for Skin&Earth, letting the music inspire the comic and vice versa.

“I feel my whole life has lead up to a project like this. It's a complete convergence of everything I love—music, comics, post-apocalyptic romance, crystals, wine and powerful ladies, all perfectly entwined,” Lights explained when the album was announced. “It'll be by far my most care-free and fierce album yet. I think now, more than ever, people need a reason to listen to a whole record, and this is mine.”

But one thing that had us all stoked and surprised is when Lights dropped “Savage” featuring everyone's favorite drummer, Josh Dun.

“He was hearing the record as he's friends with one of the guys I was writing with who's in a band called Flor, we did a bunch of great tracks together, and he's like, 'Let me play on some of this'. So we booked some studio time and then just like that he was playing on a track.”

And for fans of the comic series that Lights wrote alongside the album, it looks like it might not be ending anytime soon.

“It's definitely a bigger story than six issues, but I think it wraps up in a really cool way at the end of it. There's always room for more, if you ask me.”

What was your favorite track off of Skin & Earth? Let us know in the comments!