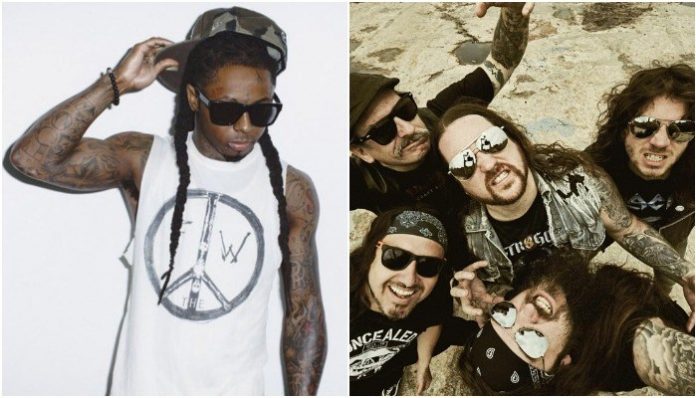 The rapper’s connection with the scene as been undeniable for quite some time now.

Wayne dropped a mashup with blink-182 last fall while on an epic tour with the band.

He and drummer Travis Barker recently worked together on a collaboration with Rick Ross when Barker announced his new label, DTA.

The track is titled “Gimme Brain” and you can check it out below.

If you are unfamiliar with Municipal Waste, they are a crossover thrash band from Richmond, VA and have been around for nearly two decades. They have also released six studio albums, four EPs and four splits.

The band’s frontman Tony Foresta posted the photo of Wayne on Instagram with the caption “Lil Wayne rocking some Waste pants that someone made.”

The rapper paired the pants with a long T-shirt and stylish leopard-print coat.

Check out the photo of Lil Wayne wearing the custom pants below.

Lil Wayne rocking some Waste pants that someone made. 🤷🏻‍♀️👍 #municipalwaste

Wayne isn’t the only big-name star to wear Waste’s logo. Back in 2012, Foresta posted a photo of Rhianna sporting the band’s name.

Ok now Rihanna is rocking a Waste logo on the back of her new album? What the frig is happening here?!?!

Ok now Rihanna is rocking a Waste logo on the back of her new album? What the frig is happening here?!?!

In December authorities in Miami found guns and drugs aboard Lil Wayne’s plane.

upon arrival at the Miami-Opa Locka Executive Airport, Lil Wayne’s charted plane was searched. Authorities found multiple firearms, opioids, cocaine and marijuana. The search was conducted by the FBI, ATF and other local agencies.

Wayne’s attorney Howard Srebnick, told the Herald that the rapper was “cleared” to leave the scene.

Lil Wayne appeared to be in good spirits about the whole ordeal, even making jokes. In a tweet, the rapper jokes about the law mistaking an earlier tweet about the Green Bay Packers for a different type of pack.

The thrashy, speed-metal band revealed their new EP The Last Rager will Oct. 11.

The EP is put out under Nuclear Blast and features four ripper tracks that embrace the band’s punk and street metal roots without clutching the past.

Municipal Waste released a live music video for the single “Wave of Death,” taken from the EP, which can be viewed below.

The Last Rager is available here.

Would you ever like to sport some Municipal Waste pants like Lil Wayne? Let us know in the comments down below!