Less than two weeks into the tour, Lil Wayne has reportedly quit the blink-182 run.

The blink-182 and Lil Wayne tour got off to a rough start, delaying the kickoff “due to unforeseen production delays.” Now, less than two weeks in, it appears that Lil Wayne has called it quits.

The tour hit Jiffy Lube Live in Bristow, Virginia this evening. Many reports from fans at the show state Wayne ended his set prematurely and said he was done with the tour.

Several fans report he played approximately four tracks for a 20-minute set before quitting the tour and walking off stage.

🤣 Lil Wayne preformed four songs tonight and then abruptly ended his set and quit the tour he is on with Blink-182.

#lilwayne says he’s done with this blink-182 tour and this is his last date! #Jiffylubelive

We are at the @blink182 show and #LilWayne was on and off in like 20 min. He was supposed to have an hour set. The fuck man. #disappointed

Fans state he complained of the crowd size. He also allegedly stated there weren’t enough fans of “his” in the audience, drawing attention to the difference in genres on the tour package.

He said it wasn't "his" crowd and it might be his last show of the tour. And then he cut his set list in half and walked off. The band looked confused as fuck

Wow , @LilTunechi just said this maybe his last night in the Blink 182 tour. Cited the lack of rap fans/his fans

@LilTunechi just dissed everyone saying this might have to be his last night on this tour Pretty Much because we aren’t good enough for him! Honey you are the odd ball out here, you decided to play between @NeckDeepUK and @blink182

AND STRAIGHT UP LEFT THE SET AFTER 4 SONGS… IM DEAD🤷🏼‍♀️💀 (but at least I got some videos) pic.twitter.com/KSVUHkPQND

Fans stated there was a weather alert for the area. With a bad storm rolling through, this reportedly affected the turnout and the lateness.

What’s up with the #RVA show? Just because of rain and late folks should not have an effect on your performance. SMH 😞

@LilTunechi @TMZ My dude you opened your concert “without us, you ain’t shit” but then you leave us after 5 songs when we waited in the damn rain for 3 hours. PayPal me my gas and ticket money #blink182

Ben Bruns, who lists himself as blink’s System Engineer on his social media, also reported what many fans had been saying. “Soooo… Lil Wayne just said he was over it and walked off stage 40 minutes early,” he tweeted. 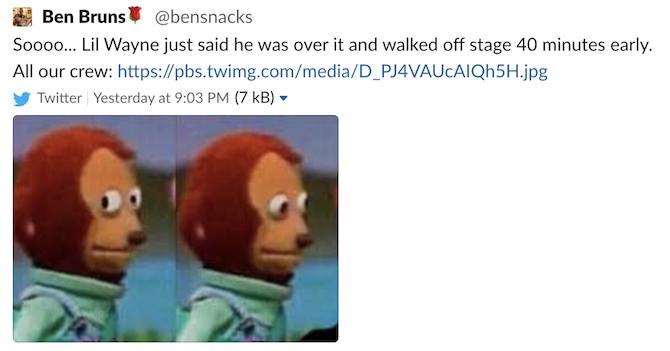 Lil Wayne stopped mid-song to make a statement to the crowd. He explained he’s “not sure how long [he’s] going to be able to do this tour,” before walking off shortly after.

“Hold on, I just want the people to know, if you’re wondering, please forgive me but I am so not used to performing to a crowd—and there’s not too many—that’s not my swag,” he says. “I’m not sure how long I’m going to be able to do this tour, but make some noise for blink-182 for including me anyway. This might be my last night though. Let’s go.”

Came to Jiffylube to see @LilTunechi tonight and my mans did 4 songs, said “y’all are wack I’m outta here” and dipped off the stage. He just entered Lebron territory in my book. GOAT to WOAT in a matter of 15 minutes

I didn’t get him saying he’s done with the tour but I did catch him walking off stage pic.twitter.com/fkfluWBMvh

blink-182 continued with their set, reportedly taking a shot at Lil Wayne’s move according to fans. However, others stated they’ve heard Mark Hoppus make the same joke at other shows.

Wow! @blink182 took a shot at @LilTunechi ! “We are goin to play one more song then we are going to play more! You know why? We are contractually obligated!”

Neither blink-182 or Lil Wayne have made an official statement, but this post will be updated should one be released.

The tour continues this week with Neck Deep as support, hitting Bangor, Maine Saturday. You can see a full list of remaining dates below, including the rescheduled kickoff show, which now features All Time Low. Tickets are available here.