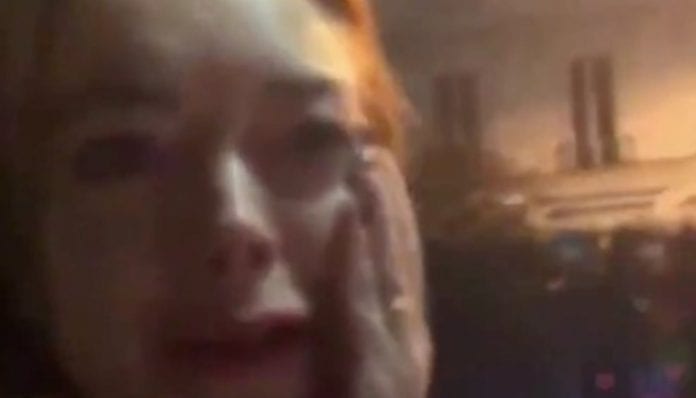 Last night, Lindsay Lohan heckled a homeless family and ended up getting punched in the face. Plus, she live streamed the whole thing. How’s your day going?

We haven’t heard much from the Mean Girls star as of late, but now she’s trending for all the wrong reasons.

After leaving a nightclub in Russia, Lohan came across a homeless family sleeping on the street. Per the video, she offers to buy them a hotel room, but they kindly decline, shaking their heads.

Not taking ‘no’ for an answer, Lohan then offers to take just their children to her hotel room for the night, enticing them with the idea of watching movies on TV. The mother yet again declines.

If things weren’t weird enough already, Lohan starts speaking in a Middle Eastern accent until the family gets up and leaves. Following them in the dark, she accuses the mother of human trafficking and yells “Don’t fuck with Pakistan!” while still trying to take the children.

Finally, when Lohan tries to grab one of the children by the hand, the mother turns on a dime and punches her right in the face.

And then she cries.

If you don’t believe us, check out the videos below. She live streamed the entire thing on her Instagram story:

Obviously, some of the comments have been pretty great:

all I could think of when lindsay lohan was making up some accent on her instagram live ???????? pic.twitter.com/9D64e0nFIy

That mama SMACKED the accent out of Lindsay Lohan pic.twitter.com/zzRRTREDt3

Lindsay Lohan just tried to steal two refugee children live on instagram and then the mom attacked her. What a wonderful time to be alive.

If someone doesn’t press charges against Lindsay Lohan for attempted kidnapping, at least get her for that horrible Arab accent.

What do you think of this whole fiasco? Sound off in the comments!

Watch more: The complete guide to autumn for emos