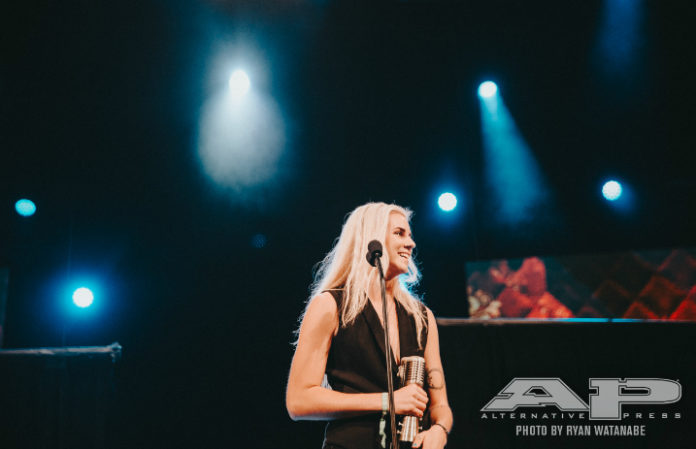 PVRIS’ Lynn Gunn has won the award for Best Vocalist at the 2017 Journey’s Alternative Press Music Awards, Fueled By Monster!

“I didn’t think that this was gonna happen and everyone who was nominated is so fucking talented. Thank you, it means a lot. I appreciate it,” said Gunn.

Gunn’s melodic presence offsets a lot of the electronic aspects of her band, allowing her to avoid being pigeonholed as exclusively “pop” or “rock,” but as a compelling performer, first and foremost.

After a fan vote, Gunn won against fellow nominees in Neck Deep, Set It Off, State Champs, the Maine and Every Time I Die.

Read more: PVRIS’ Lynn Gunn opens up on coming out

PVRIS are also nominated for Most Dedicated Fanbase. They released White Noise in 2014 and are currently preparing for the release of their new record, All We Know Of Heaven, All We Need Of Hell, which arrives Aug. 4 via Rise Records. Hear their singles, “Heaven” and “What’s Wrong,” now!