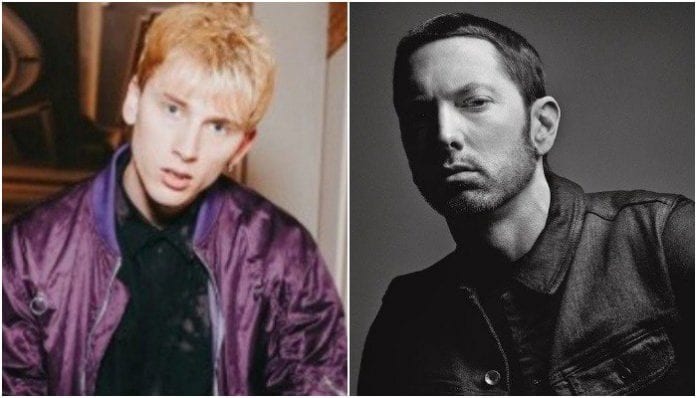 Following the release of Machine Gun Kelly’s diss track “Rap Devil” this morning, the rapper has taken the dig at Eminem even further by releasing a video. Check out the clip below.

Well, we all knew it would only be a matter of time before Machine Gun Kelly would fire back at G-Eazy and Eminem for their diss tracks against him.

Today, the Cleveland rapper unveiled his response to Eminem in his new track, “Rap Devil,” a single that seems to be a nod to Em’s 2013 song “Rap God.”

While MGK did share some commentary on the situation while it was happening, the rapper decidedly waited until this morning to drop his official response to Eminem, who called out MGK for his comments about his daughter in 2012.

Changing his Twitter bio to “fuck rap god I’m the rap devil,” the rapper then shared a link to his new track “Rap Devil,” a track dedicated to the Rap God himself, Eminem.

Listen to “Rap Devil” below:

Additionally, MGK wrote in a statement about the new song that he’s not only standing up for himself but his generation as well. Check out the post in full below:

“I’m standing up for not just myself, but my generation. I’m doing the same shit you did back in ur day. life is still real on my side, and I had to take time from the grind to defend myself from someone I called an idol. love, Rap Devil.”

im standing up for not just myself, but my generation. im doing the same shit you did back in ur day. life is still real on my side, and i had to take time from the grind to defend myself from someone i called an idol. love, Rap Devil.

While this seems to be an ongoing battle between the two rappers, it appears that Eminem and MGK’s feud started with MGK’s comment on Eminem’s daughter and escalated after MGK came after Eminem in Tech N9ne’s “No Reason.”

The verse in question:

“I pop cherries and popstars, you popsicles is not hard
Popped in on the top charts out the cop car
To remind y’all you just rap and not God
And I don’t care who got bars.”

Since the release of the track, Tech N9ne has thrown himself into the mix.

Two days ago, the rapper posted a screenshot of a text conversation between himself and his producer discussing the track in question, where it was revealed that neither of them realized MGK was talking about Em’ during his verse.

I woke up to a text from my producer!

What do you think of the latest MGK versus everyone feud? Sound off in the comments below!