Congrats are in order for Machine Gun Kelly, Pete Davidson and the rest of the Big Time Adolescence cast.

The coming-of-age drama is heading to the Sundance Film Festival, and both Davidson and MGK were stoked to share the announcement on social media.

Davidson, who previously deleted all of his Instagram posts, broke his social media silence to share the exciting news.

The Saturday Night Live actor posted behind-the-scenes snaps and stills from the film with a simple “See you at Sundance muthfuckas #bigtimeadolescence.”

He also posted the news to his Instagram story where he congratulated some of the cast and crew. 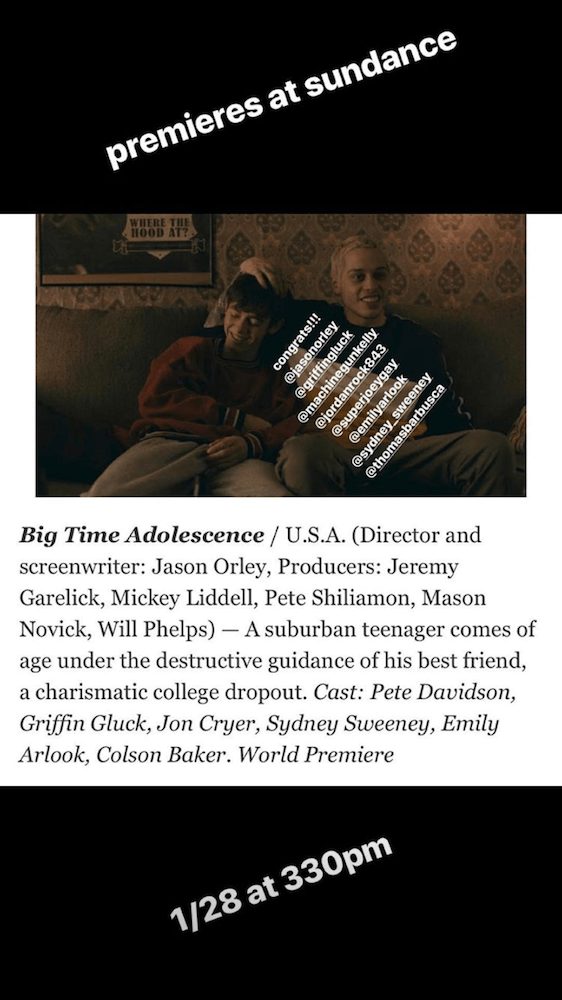 MGK later took to his own Instagram where he shared the same set of photos as Davidson.

Not much is known about the film itself yet. The short and sweet synopsis reads:

“A suburban teenager (Griffin Gluck) comes of age under the destructive guidance of his best friend, a charismatic college dropout (Pete Davidson).”

Big Time Adolescence filmed in Syracuse, New York this past summer. While there, MGK and Davidson filmed a clip for the former’s new track at the time, “LOCO.”

The video had no budget or plan according to the rapper. MGK reveals in the video’s title text that the new footage was captured between takes for their film.

The video also includes some throwback footage such as MGK face planting and injuring himself while on tour in Germany. The infamous fall required a cast and stitches.

The track later appeared on his Binge EP, which dropped in September. You can check out the video below.