Machine Gun Kelly, YUNGBLUD were in the studio together again—UPDATED

Travis Barker was also spotted in the studio with YUNGBLUD again.

MGK took to Instagram stories to share a photo with Barker and reveal new music with YUNGBLUD is on the way.

“appreciation post for one of the baddest motherfuckers/mentors @travisbarker. wait until ya’ll hear this song. @yungblud.” 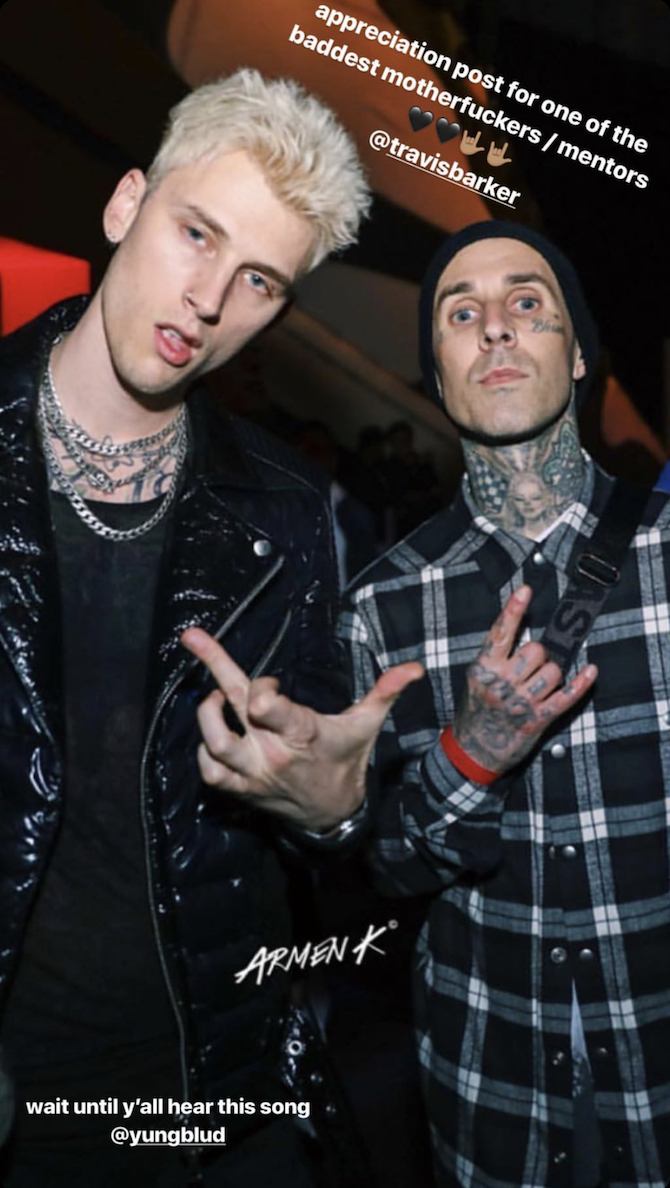 The rapper also revealed he went to show off Hotel Diablo at Interscope, complete with some themed gift bags. 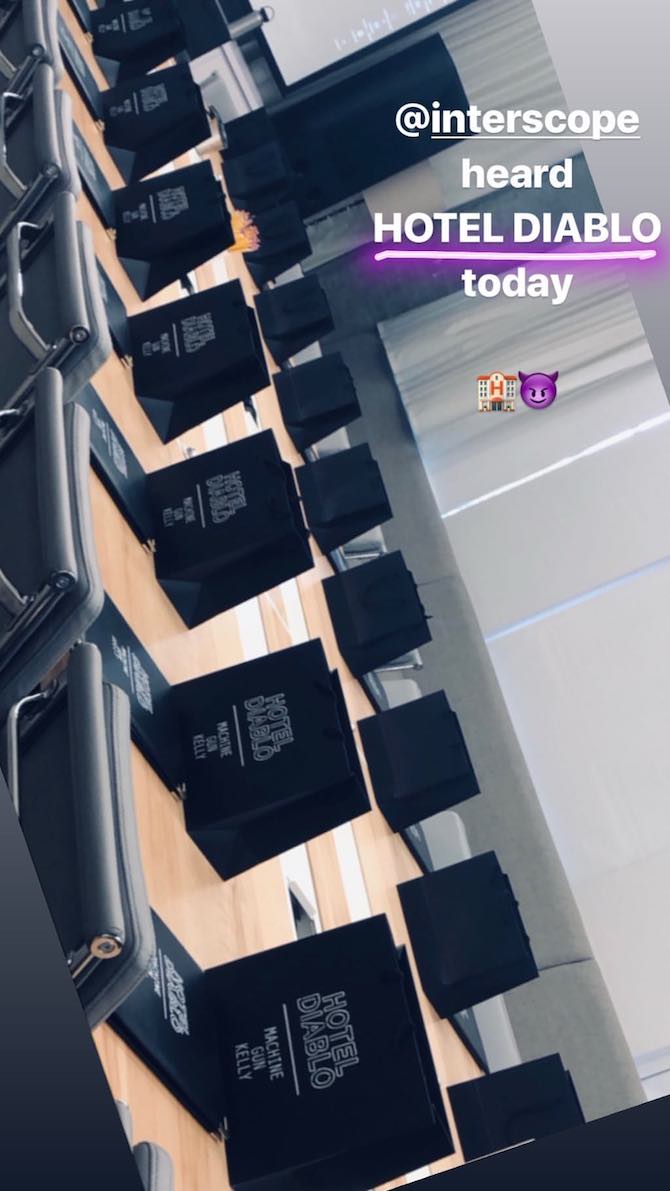 He also shared a short snippet of a track and shared, “they gave us a release date.”

Machine Gun Kelly has been hard at work on his upcoming fourth full-length Hotel Diablo. While the rapper announced the album name and a massive tour earlier this month, it appears he’s still working on something in the studio.

Back in March, MGK, YUNGBLUD and Travis Barker began sharing some photos from what appeared to be a studio. Now, it looks like they’re back at it again.

Given the short, muted clip, it’s not clear what the group are working on and whether it’s an MGK or YUNGBLUD-led track.

While much of MGK’s band is present, suggesting it could be for Hotel Diablo, YUNGBLUD took to Instagram to share another tease. After leaving the studio, he shared a video expressing how stoked he was on the upcoming music.

“just leavin the studio, can’t wait 4 u to hear this stuuuuuf.”

The following day, YUNGBLUD shared another photo with just Barker in what appears to be a studio, suggesting the duo could be at work together again. 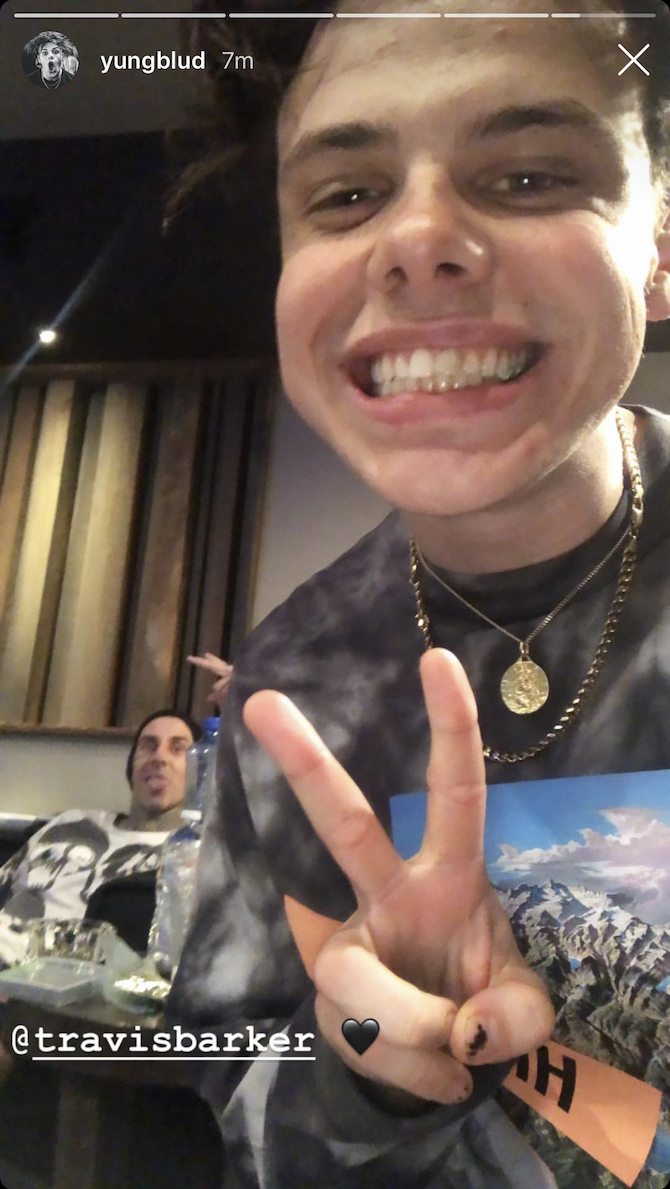 Back in December, MGk announced he scrapped his entire fourth full-length. At the time, the rapper took to Instagram to share he reached almost 500 million streams on Spotify in 2018.

However, the rapper also used the post as an opportunity to tell fans that he hasn’t stopped thinking about his fourth album.

“Half a billion streams this year,” the rapper says in the Instagram post. “Very grateful but I didn’t give you the 4th album and I can’t stop thinking about that. I finally figured out what I’m gonna call it last night and I’m starting it all over from scratch. This one’s from the soul.”

The following month, he shared what could be some new album beats. Then in February, MGK popped up in the studio with Barker, suggesting for the first time on this album cycle that they were working together on something. Days later, the aforementioned clips of the duo and YUNGBLUD were shared.

Shortly after, MGK revealed the upcoming record is going to be “just as honest” as sophomore full-length General Admission. Days later, the first hint of potential new music surfaced as BFF and Saturday Night Live comedian Pete Davidson shared a clip of MGK referencing him.

“I even got my homie Pete out here like fuck the jokes,” the song declares.

A few days after that, MGK broke the news of Hotel Diablo and a tour of the same name. He also shared another snippet of what looks to be a new song and perhaps is the one he pushed to pay respects to late rapper Nipsey Hussle.

Machine Gun Kelly kicks off his tour at the end of this month. Tickets are on sale now with dates available below. YUNGBLUD is also hitting the road later this month with dates below and tickets available here.