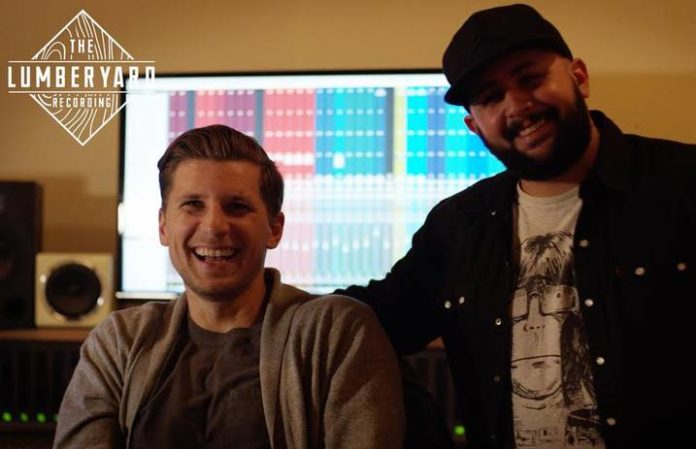 Man Overboard's Nik Bruzzese and the Early November's Ace Enders have teamed up to produce, engineer and perform a new Christmas song in their recording studio in Hammonton, New Jersey called The Lumberyard.

Watch the video of “Jacob Marley” below, and find out more about that beautiful studio here.

Jacob Marley is, of course, the fictional character in Charles Dickens' classic tale A Christmas Carol that haunts Ebenezer Scrooge, his old business partner. The duo wrote the holiday song as a way to show off their skill as producers.

Check it out below, as well as a new interview where Bruzzese and Enders talk about their new recording studio, The Lumberyard.

NIK: Hello! My name is Nik Bruzzese and I am here with my friend Ace Enders. I have played in, toured with and wrote records in Man Overboard since its inception in 2008.

ACE: I have played in The Early November even longer than that and also released albums as Ace Enders and I Can Make A Mess Like Nobody's Business.

NIK: Earlier this year Ace and I teamed up to open a studio here in New Jersey called The Lumberyard. We recently wrote and recorded a Christmas song called “Jacob Marley” that is premiering here on Alternative Press. The song was recorded at The Lumberyard by Ace and I and we hope it gives you a little peek at our abilities. Now we’re going to dive into our history as producers, engineers and songwriters and hopefully tie you an insight into what we like to accomplish at The Lumberyard and our take on producing music.

NIK: I’ve gone from recording in my basement, to recording in a small shed to finally building a professional studio work environment in the span of about 15 years. A lot of my success came from recording a lot of the early Man Overboard stuff, which then led me to work with people like Will Yip, Bill Stevenson, Jason Livermore and Jesse Cannon. I like to say I've learned from some of the best in the business.

ACE: I went to record my fist real EP when i was 18. My band was small but starting to do well. We went to a studio right outside of NYC and spent a week there really soaking it in… That’s when I was first really turned onto the idea of recording. That was the first time I had to do pre-production and it really taught me a lot about crafting a song and the importance of pushing your creative ability. As a kid I had always been a little insecure about my voice and I wasn’t very good at singing in a studio environment. Once we started tracking I quickly blew out my voice and our producer told me to take a week off then come back to finish. Right before I was going to head back to finish up my band showed me the fully finished record with another singer. Our producer had convinced them to get someone else to replace me while I was getting my voice back. It was a bummer and as an 18 year old kid who had just saved up enough money to go to a real studio, my heart was broken. It was probably the main thing that got me into recording and taught me my first lesson in the music industry.. so I’m extremely thankful for it. After that experience, I didn’t have a band anymore so I took out a bunch of loans and bought my first real recording gear. I was way over my head in debt, but i had a studio… in my moms basement.

NIK: A valuable lesson I have learned, and something I take with me in every session is that in this business it’s not about me and what gear I have or where I went to school, it’s about the band. They may have written some amazing songs, worked hard on bringing them to the next level and want to find someone who can bring them to that radio ready spot. They might feel like they sound good but they could sound better, or that they don't compete with the songs you hear elsewhere. I want to help bands reach their full potential.

ACE: Since purchasing the gear for my original studio I have learned so many valuable lessons about both recording and the music industry… I think thats one of the best parts about what we’re trying to offer at the Lumberyard. We have both worked really hard in our respective bands and know how important it is to have an environment that allows you to be comfortable and bring your ideas and goals to life.

NIK: After recording at The Blasting Room, I wanted to create my own version of that style of a recording studio. With multiple rooms getting used at all times, comfortable and vibey, and everyone working as a team. We know what it takes to make it in this business and I think what we have is special.

ACE: Coming from a band that has toured for and made records for the past 15 years has really shaped who i am as a producer and a co writer. i feel like overtime i work with someone i can become apart of their band for the time that they’re here. we care every step of the way.. not to sound cheesy, but music and songwriting has been so important to my life that its something i respect so much when working with other people.

NIK: We have plenty of examples of clients that went from good song to great song. I come from being in a band, so I identify with normal band problems, and I feel the pain of struggling to find a next level recording… I want help artists to find a great sounding recordings, mixes or masters on a small budget.

ACE: Recording and touring for the last 15 years has really shaped who I am as a producer and co-writier. I feel like anytime I work with someone I can become a part of their band for the time they’re here. We care every step of the way… not to sound cheesy but music and songwriting has been so important to my life that it’s something I respect deeply. One of the biggest things we focus on here is the shaping of a song. To me it’s always the most important.. I’d much rather have a great song sound good than a good song sound great. because in the end it the song that connects with people not the quality of recording… but we’ll make it sound great also.

ACE: The best part about Nik and I teaming up is that one of us will always be able to focus sound while the other can focus on the song. It’s a really cool way of doing it.. one that I wish I would have been able to experience as a younger band.

NIK: It's a process that we believe in and we are really looking to build this the right way. Making records with bands we believe in and really helping them get to that next level. We are grateful to have had so many amazing bands in this year, and are very excited about the future. Please check out our Christmas song and reach out if you’re interested in recording some music. Have a great holiday everyone!