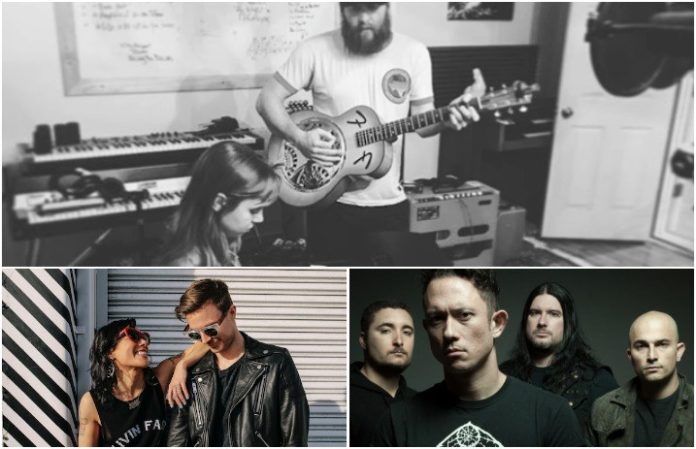 Watch new music videos from Matt And Kim, Trivium and more—plus, don’t miss Manchester Orchestra and Julien Baker's cover of Pedro The Lion. Check out the news you might have missed today below!

Read more: Bullet For My Valentine dedicate song to Suicide Squad’s Margot Robbie, her response is all of us

Manchester Orchestra and Julien Baker have teamed up to cover Pedro The Lion’s “Bad Things To Such Good People,” which you can pick up here. Proceeds from the song will be donated to 1 Million 4 Anna, a foundation with the mission to eradicate Ewing's sarcoma. Manchester Orchestra will be heading out on the road for a U.S. tour this spring, and you can get tickets here. Julien Baker will also be doing a few shows, and you can pick up tickets here.

You might recognize 13 Reasons Why star Dylan Minnette, and his band shared their latest single, “Pictures Of Girls.” You can snag your copy of the single here!

3. Matt And Kim announced a new album and dropped a single

Matt And Kim announced their forthcoming LP, Almost Everyday. The band also released a lyric video for the record's single “Like I Used To Be,” which you can purchase here! The band will also be going on tour, and you can check out the dates and get your tickets here.

4. The Sherlocks announced a tour

The Sherlocks are going on a North American tour. Check out the dates below.

To recap their latest tour, Trivium shared a new music video for their song “Betrayer.” The song is taken off the band’s latest album The Sin And The Sentence, and you can grab your copy here!

HalfNoise shared their new song “Flowerss,” taken from the band’s upcoming EP Flowerss. You can snag your copy of the single here! The band will also be going on a West Coast tour with the Gloomies, and you can grab your tickets here!

Jule Vera released a music video for their song “Bad Company.” The track is taken off the band’s sophomore album, Waiting On The Sun, which you can pick up here! The band will also be on tour with Our Last Night, I, The Mighty and Don Broco, and you can get your tickets here!

8. Settle Your Scores announced a new album and shared a new music video

Settle Your Scores signed to SharpTone records, and the band announced their new album, Better Luck Tomorrow, which is set to be released April 13. You can get your copy of the album here!

The Norwegian dance-rockers in Datarock have shared their new single, “Feathers & Wax.” The track is taken off the band’s first album in nine years, FACE THE BRUTALITY, available March 9. You can get your copy of the album here!

Fans of Good Tiger are in for a treat: The band shared an album documentary, documenting the making of their latest album, We Will All Be Gone. You can pick up the album here! The band will also be heading out on tour, and you can pick up tickets here!