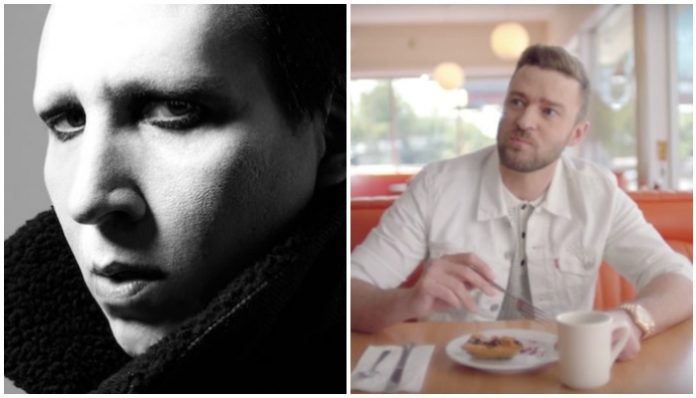 Marilyn Manson‘s presence goes far beyond the world of metal and rock music with countless celebrities in music and film knowing him on a more personal level and Justin Timberlake is sharing a story about how the two became friendly with each other.

In a recent episode of Hot Ones, Timberlake eats spicy wings while telling a story about how Manson came to him at a party and told him he loved his new record while saying not to tell anyone.

In the new clip, Timberlake eventually gets asked about Marilyn Manson saying people underestimate how badass JT is. Timberlake jumps in during the question to exclaim that “Marilyn’s awesome” before giving his response about their friendship.

“The first time I ever met Marilyn he came up to me at a party and someone tapped me on the shoulder and I turned around. I was 21 and he goes, he’s looking down at me and says ‘I think your debut album is the most genius thing that’s come out in the last five years.’ I was like, woah, thank you bro that means a lot. I think you’re fucking genius yourself. He goes, ‘please don’t tell anyone I told you that’ and he walked off.”

He continues by explaining how their relationship developed after that interaction.

“Years later, Marilyn and I kicked it a bit. I love Marilyn, he’s a rad, rad human.”

You can watch that part of the interview around the 23 minute mark in the video below.

Manson clearly does have a lot of respect for Justin Timberlake. He once covered his track “What Goes Around Comes Back Around” acoustically during a radio appearance. You can see that and check out the original version below.

Are you surprised Marilyn Manson is friends with Justin Timberlake? Let us know in the comments below.