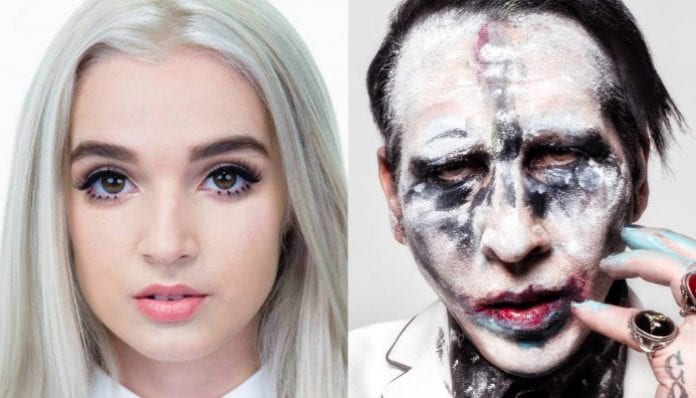 Are Marilyn Manson and Poppy cooking something up together? The two entertainers stoically pose in a new photo on the veteran shock-rocker‘s social media outposts. Seemingly snapped at Disneyland, it may leave fans of the mysterious YouTube sensation wondering just what she’s doing hanging out with the avowed Justin Bieber basher.

Interestingly enough, Poppy previously expressed a desire to team up with the Antichrist Superstar. Speaking to the NME earlier this year, she noted that the juxtaposition of craft between her and the “legend” would be a “beautiful” thing.

“I’ve talked to him before,” she says. “He said that he likes my videos and then I said that I like his art. I met him on Twitter too. I tend to meet everyone on Twitter, but poor Twitter. Twitter doesn’t seem to be doing so well right now.”

What do you think Poppy and Marilyn Manson have up their sleeves? Is a music or video collaboration from the presumably dastardly duo in the works? Would you buy an album of music or watch a video or film from the two together? Sound off with your thoughts on this unlikely artistic pairing in the comments!