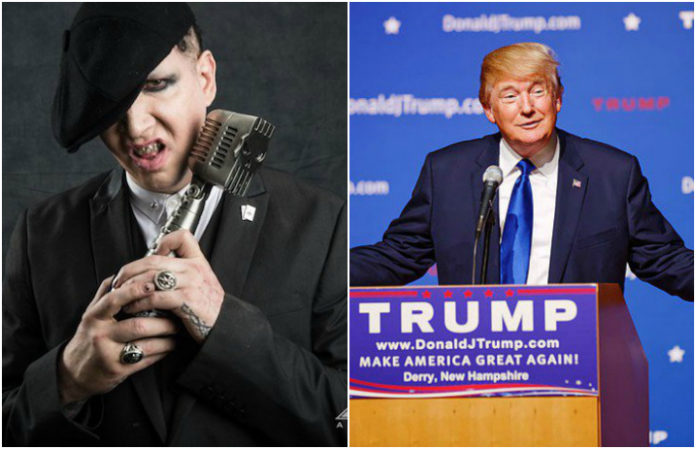 Marilyn Manson has been a long-time showman, and his artistry has been received in a number of ways over the years —But one thing he is not shy about is his political view. And here on Election Day 2016, Manson has dropped a new clip from his music video for his first single, “Say10,” and it’s quite unsettling. Check it out below.

The NSFW clip comes from the title track off of Manson’s upcoming album Say10, which is due to be released in February. In the video, the Pale Emperor dissonantly rips away at a bible, before ominously gripping a knife as the song builds up to its chorus. The next visual shows a man in a suit and red tie lying in a pool of blood, uncannily resembling the likes of Donald Trump.

Manson has already been quite vocal on his opinion in this year’s election, and has previously stated that he won’t be voting considering his choices are between “cat shit and dog shit.”

“I don’t think that, as an artist, I can make as much of a difference voting as I can the commentaries I make in music on my next record, Say10,” he explained via The Daily Beast.

“Either way [today] goes, the visuals are meant to create contemplation. Because it’s obviously bigger than just tomorrow,” he says. “It’s about the desperate acts of people who believe something that is preached by an unbeliever.”

The video was both conceptualized and directed by Tyler Shields, and addresses Manson’s position on the election forthright. He has also related the politicization of the campaign season to that of his own career, where he’s continuously gone under scrutiny for his aggressive approach in spreading his message.

“Right now we’re in such a state of confusion when it comes to religion, politics, sexuality, and how they all tie together, and it’s being turned into a circus and a sideshow—and that’s something that I’ve been described as a ringleader of,” Manson told The Daily Beast. “It seems like a time for me as an artist, and as an American artist, to make something that causes a new set of questions to arise that aren’t simply statements.”

Check out the newest clip from the “Say10” music video (NSFW) below, and let us know what you think about Manson’s assertive stance in the comments.