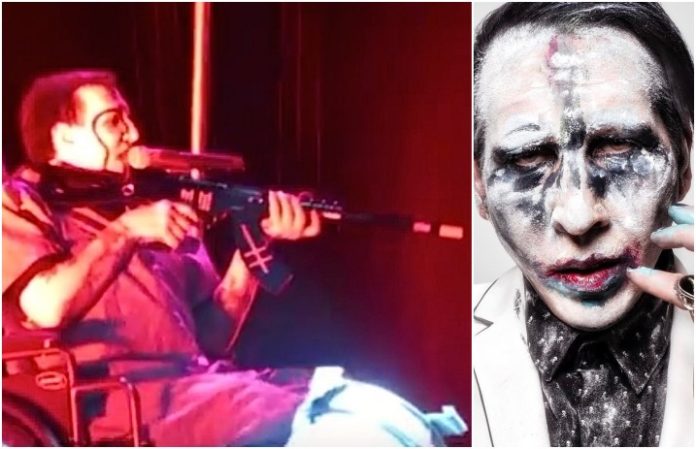 Marilyn Manson has issued a statement regarding his use of a prop gun during his band's Ozzfest Meets Knotfest performance in San Bernardino, California, on Sunday. Ever the pop-culture commentator, Manson contends his onstage use of the imitation rifle was meant as a criticism on the availability of semi-automatic weapons. Read the musician's full statement, via Variety, below:

“In an era where mass shootings have become a nearly daily occurrence, this was an act of theater in an attempt to make a statement about how easily accessible semi-automatic weapons are and how seeing them has become normalized. My art has always been a reaction to popular culture and my way to make people think about the horrible things that happen in this world. My performance was not meant to be disrespectful or show any insensitivity. The prop microphone I used on stage was handed to me with the approval of a police officer. My empathy goes out to anyone who has been affected by the irresponsible and reprehensible misuse of REAL guns.”

Marilyn Manson wasted no time getting back to his signature shock-rock gambits at this weekend's Ozzfest Meets Knotfest, the singer brandishing what appeared to be a rifle-shaped microphone attachment—all while performing in a wheelchair—at the two-day festival in San Bernardino, California.

Manson's headlining appearance during the Knotfest night of the festival on Sunday, Nov. 5, marked the musician's first live show since both breaking his leg in an onstage accident and firing band member Jeordie “Twiggy Ramirez” White after the bassist was accused of rape, as noted by Theprp.com.

While former The Mars Volta player Juan Alderete reportedly handled bass duties (although it's not known if the new bassist is a permanent addition), Manson himself used a specialized wheelchair throughout the gig, at one point being ushered about by a man dressed in surgical scrubs. During the performance, as seen in the video below, Manson began dramatically “taking aim” at the audience with the microphone apparatus fashioned like a gun.

The performative, faux firearm-wielding from Manson could seemingly be taken as commentary: That morning, as covered by NBC News, a mass shooting at a church in Sutherland Springs, Texas, claimed the lives of 26 people, injuring 20 others. It's being reported as the the worst mass shooting in the state's history and the deadliest-ever in a U.S. house of worship.

Manson is no stranger to gun commentary and his artistic role after real-life tragedies. Even two decades later, the musician is still discussing the public blame he shouldered following the 1999 Columbine High School massacre.