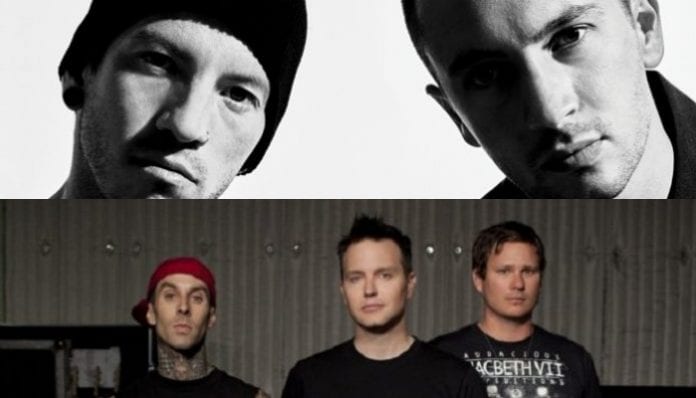 Mark Hoppus of blink-182 has offered up his own lyrical remix of “Chlorine” by twenty one pilots that mashes up the track with “All The Small Things.”

Hoppus is known for clowning around on Twitter, and he shared his idea for the combined lyrics with his many followers, and honestly, it’s pretty genius.

His followers couldn’t help but applaud at the creativity and loved the crossover between the two beloved scene bands. See what fans had to say on Twitter about Hoppus’ creative take on the lyrics below.

this is disturbing delete it

Now, we just need Hoppus to create a musical rendition of this mashup so we can truly understand his full vision.

While we wait for that to drop, you can listen to “All The Small Things” and “Chlorine” below.

Tom DeLonge has made a statement about his time with blink-182 and squashed rumors that there is any bad blood between him and his former bandmates.

“There was a real unity of spirit in the band; [it’s] when the band found itself,” vocalist Mark Hoppus explains.

“When Tom was in the band, that’s when Blink did its best work,” he adds. “Now post-Tom, with Matt in the band, we’re approaching songs differently.”

As far as the current relationships go between the former bandmates, Hoppus reveals there are no hard feelings.

“I talked with Tom for the first time in two years right before we started this tour. The conversation was more about us just telling each other, ‘No hard feelings. You do your thing, we’ll do our thing.’ It’s all good.”

Then, while DeLonge performed in Chicago with Angels & Airwaves recently, he also spoke about his relationship with the members of blink despite their professional breakup.

“I started another band called blink-182, and I definitely want to let you guys know, contrary to a lot of talk out there in internet land, I’m super, super, super thankful for that band,” Tom said to the crowd of the show. “I love that band – I started that band, by the way, I love Mark and Travis, we still talk, we’re all good. Everything is awesome and people don’t know, so they say a bunch of weird shit on the internet.”

“But I’ve always been one of those guys that wants to do something different all the time. I’m like, ‘How do I really really challenge myself to feel things that are different to what I feel now, and how do I do that with other people, and inspire the people the way that I’ve been inspired?’ So that’s kind of been my path for a long time. It started with Boxcar Racer, and then Angels & Airwaves.”

You can see a video of DeLonge speaking about blink to the crowd below.

Tom Delonge talking about his relation with Blink 182 members at Angel’s and Airwaves concert in Chicago. from r/Blink182

Blink-182 just dropped their most recent album NINE, which is available now here. You can also stream it below.

What do you think of Mark Hoppus creating a blink-182 and twenty one pilots mashup? Sound off in the comments down below!