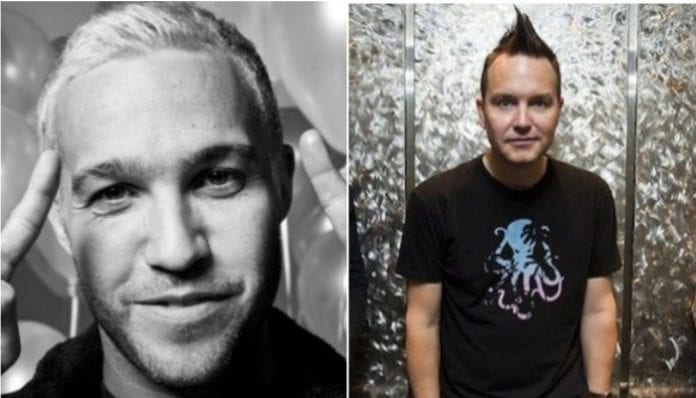 Unfortunately, it will never see the light of day, but you can check out all we know about it below.

Hoppus has been out promoting his new band with All Time Low’s Alex Gaskarth, Simple Creatures, and one of the topics of the interviews has been collabs. While mostly talking about music collaborations, he shared an unexpected story on KROQ’s “Kevin and Bean Show.”

One of the show’s co-hosts, Jensen Karp, was explaining how he met both Hoppus and Gaskarth through Wentz when the blink-182 frontman shared a really interesting anecdote. Apparently, the Fall Out Boy bassist, Karp and him once wrote a kid’s cartoon together. Yes.

“It will never see the light of day but [we] worked on an idea for a children’s animated show that we pitched to Disney, we pitched to a bunch of different studios,” Hoppus explains.

The story was apparently about a group of fish that were in a band. However, there was a villain too, and he was a sushi chef. Obviously, Hoppus and Wentz played two of the fish. However, other pretty famous artists, such as Ashlee Simpson and Pharell Williams, also gave life to characters in the show.

“It was a great idea, great concept, great songs,” Hoppus continues. He says they didn’t end up getting it because “another fish show” had been pitched right before.

Although we can’t get access to any footage of the animation, you can hear Hoppus talking about it on the Kevin and Bean show here.

All we know about Bronze Blue

Variety got ahold of a few more details about the show than Hoppus let slip in the interview, and we couldn’t be happier about it.

According to the report, the show was called Bronze Blue, and told the story of “an underwater punk/pop band singing catchy, eco-friendly tunes.”

Wentz played Shrimpy, a “striped big-mouth bass bassist,” Hoppus was Tako, a guitarist octopus, and Karp would be the Sushi Chef. Other characters included lead singer J. Dory, a seahorse; Coral, who was the female vocalist; Al-G, the keyboardist seal; and a starfish called Barrel Bob on drums.

After Shrimpy’s old band falls apart from mercury poisoning, he posts a listing on Craigslist to form a new group. Thus, Bronze Blue is born. “The band came together to sing ‘about friendship, staying healthy, respecting nature and having fun’,” explains Variety.

Karp and Hoppus even created a theme song, which you can listen to here.