Welcome back for another AltPress Weekly. Every week, we highlight the things we want you to check out. We always keep you up to date about what’s happening at Alternative Press. We’ll also bring you our latest music finds, from longtime favorites to brand-new releases.

We’ve got another week of new music discoveries and other exciting stories. There’s a ton to check out, whether you love pop punk, metal, alternative or something else. In addition to fresh tracks, we’ve also got a pile of news, lists, exclusives, playlists and premieres!

As if his work with blink-182 wasn’t enough, Mark Hoppus also hosts the Apple Music podcast After School Radio. For the 50th episode of the show, the pop-punk figurehead was joined by his former bandmate Tom DeLonge. The pair reminisced about the old days of blink-182 and discussed the things they enjoy about one another. Titled “The Mark And Tom Show,” the episode alluded to the band’s similarly titled 2000 live album. When asked about why their friendship endures, DeLonge gave a simple answer. “Because we appreciate dick jokes in a way that no one else does,” he says. “It boils down to only that. There is nothing else. It’s that, in my opinion.”

Poppy has announced her fourth studio album, Flux. The record is the follow-up to her 2020 release, I Disagree. The announcement came with a video for the album’s title track, an adventurous, psychedelic odyssey from Australian designer and visual artist Pip And Pop. To produce the track, Poppy teamed up with Justin Meldal-Johnsen (Paramore, Deafheaven, M83), who also produced the recent track “Her.” The album news follows the release of EAT, a collaboration between Sumerian Records and WWE. In addition, the artist announced a world tour, launching Sept. 30, via Instagram.

We recently published Josh Madden’s interview with the multifaceted artist Elvia. Beyond her musical talents, Elvia is also a proud mother, clothing designer and more. The artist has collaborated with her partner Idris Vicuña, aka AltPress cover artist Eyedress, and launched Lip Injections, a fashion line celebrating natural beauty. Of her musical development, the artist recalls a simple path to her unique approach to music. “I actually moved out to Vegas fresh out of high school,” Elvia says. “The music I was listening to then was mostly anything cool that I found on SoundCloud like Lil Peep, Princess Nokia, Spooky Black and so much random Jersey club music. I think with the music I’ve put out, I definitely incorporate a lot of feeling into the songs I’ve written. I want the youth to relate like I related to artists when I was much younger.”

AltPress gave readers an Album Anatomy of the Maine’s eighth studio album, XOXO: From Love & Anxiety In Real Time. In the interview, the quintet offered us a glimpse behind the scenes of their new release, as well as their goals as a band and their first radio hit in the form of lead single “Sticky.” Lead vocalist John O’Callaghan frames the album as a release shaped by care for others. “[The album] is just a snapshot of where I was at mentally,” O’Callaghan says. “With You Are OK, I definitely was thinking less ‘selfishly.’ I was thinking more [about], ‘How will people receive this?’ Hopefully, it would help them. This record, I went a bit more inward and was just speaking from direct experience as opposed to worrying about how it was going to affect other people. And hopefully, once people listen to the record, they can attach their own meanings with the songs.” 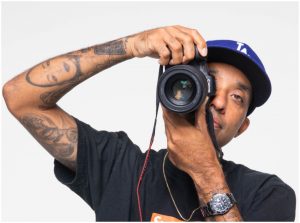 We’ve also published our interview with legendary photographer Atiba Jefferson, who, among many other accomplishments, shot our recent WILLOW cover at Milk Studios. Jefferson’s work naturally bridges the gap between photography and culture at large. He has been a key figure in basketball photography, particularly for a stint as a staff photographer for the Los Angeles Lakers where he documented key moments in the careers of Shaquille O’Neal and Kobe Bryant. Jefferson has also shot for major skateboarding magazines, including Thrasher and Transworld, as well as captured brands and music personalities from Converse and King Krule to Supreme and Lil Wayne. In the interview, Jefferson revealed his early journey into his music, his biggest sources of inspiration, his process as a photographer and more.

Producers giving back to music

Next week, we’ll be running an article on genre legends who are also making an impact as producers. In the article, author Ryan Piers highlights a range of producers, such as Derek DiScanio, Travis Barker and Nik Bruzzese, as well as artists including Stand Atlantic, WILLOW and Midfield. Representative of the ways some artists have evolved is Good Charlotte’s Billy Martin, who has collabed with a staggering range of artists and pushes himself stylistically on every project he develops. Of Martin’s work on Kid Bookie‘s “On My Rock,” Piers writes: “Kid Bookie raps at hyperspeed over a bed of chunky guitar chords. It crosses genres with ease, reminding us of Martin’s immense talent. In fact, Martin’s list of collabs, and consequently his influence, is growing.”

All Time Low will be performing live from Sad Summer Fest via the livestreaming platform Veeps. The set will be broadcast Saturday, Aug. 7 at 8:30 p.m. PT and can be watched until Aug. 10 at 11:59 p.m. PT. The show follows All Time Low’s recent single “PMA,” which featured Pale Waves along with production from longtime collaborator Zakk Cervini. Of the track, lead singer Alex Gaskarth says it speaks to the anxiety of our current moment. “‘PMA’ is a journey into isolation and overstimulation,” Gaskarth says. “It’s about the little mundane things we do to keep ourselves distracted when loneliness becomes a constant and leaves us feeling apathetic. It’s existential dread wrapped in nervous laughter kissed by the SoCal sun.”

Dave Grohl performs with his daughter

Dave Grohl recently invited his daughter Violet onstage for a cover of X’s classic punk song “Nausea” during a Lollapalooza set. The ​​Foo Fighters frontman also led the crowd in a rendition of “Happy Birthday” dedicated to his other daughter Ophelia. While it’s a punk classic, “Nausea” also has a layer of personal meaning for the artist. “There’s a band from Los Angeles that we love,” Grohl says. “They’re called X, and it’s a long story, but that drummer DJ Bonebrake, we’re actually related to each other ’cause my grandmother’s name was Bonebrake, and that’s no bullshit. So Violet and I decided we’d record a song together to pay tribute, not only to the band, X, but also to our family.”

Weezer have released a stunning version of the classic Metallica track “Enter Sandman.” While some artists might be tempted to rework the track, the cover closely follows the model of its original. Even so, Weezer’s unique sonic profile is readily on display, making the rendition wholly their own. The new song is set to appear on The Metallica Blacklist album and follows Miley Cyrus’ rendition of “Nothing Else Matters.” The Metallica Blacklist is due for a Sept. 10 release via the band’s own label, Blackened Recordings. The album will feature a range of artists covering songs from Metallica’s 1991 self-titled album, aka The Black Album.

In July, UPSAHL, aka Taylor Upsahl, released the single “Time Of My Life.” Today, we premiered a live rendition of the track. In advance of the release, UPSAHL elaborated on her inspiration for the track. “‘Time Of My Life’ is about being in the best and worst place in my life, all at the same time,” UPSAHL says. “I didn’t realize that these two feelings can exist simultaneously until this past year. As the highs got higher, the lows got lower. The day we wrote the song, I just had the question [of], ‘How come all the worst days are in the time of my life?’ floating around in my head. We wrote that into the chorus first, and then I feel like we blacked out and an hour later had a song. [Laughs.]”