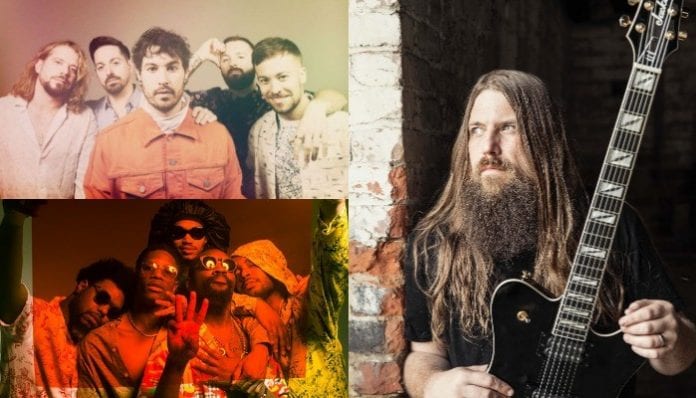 Red Sun Rising announced a new EP—plus, don’t miss the Van Halen store’s newest shoe release. Check out the news you might have missed today below!

Rooney and Phony Ppl collaborated to release a cover of Len Barry’s “1-2-3.” The track was recorded for the soundtrack of Rooney frontman/director Robert Schwartzman’s new film The Unicorn, which stars Lucy Hale (Pretty Little Liars, Truth Or Dare). You can stream and purchase the song here.

Red Sun Rising are releasing their newest EP, Peel, March 22. The album will contain four tracks including a cover of the Beach Boys’ “Wouldn’t It Be Nice.” It’s available for preorder here. The band will also be heading out on tour this spring with Goodbye June and Dirty Honey, and tickets can be purchased on their website. Check out the dates below.

Lamb Of God guitarist Mark Mortonreleased a new track, “Save Defiance.” The track features vocals from Alter Bridge’s Myles Kennedy, Alice In Chains’ Mike Inez of on bass and Korn’s Ray Luzier on drums. You can stream the song here. Morton will be embarking on a coheadling tour with Light the Torch beginning in March. VIP and general admission tickets are available here. Check out where he’ll be headed below.

The Van Halen store have released a new shoe commemorating the first Van Halen album. The 1978 high top features a black-and-white photo of Eddie Van Halen playing guitar on his first world tour and his signature on the back panel. The shoes are available for purchase on the store’s website, where you can also see Spencer Charnas of Ice Nine Kills modeling the new kicks.

Belle, formerly Belle Noire, released a new single and accompanying visual for “February.” The track is a reflection of how vocalist Joey Lancaster felt during a severe anxiety attack. “This song was written about the worst panic attack I’ve ever had,” he says. “One that pins you down in your bed and you just continue to try and ride it out, but the overwhelming feeling of dread was just too much to overcome that time around.” This is the band’s second single under the new name, and it can be streamed and purchased here.