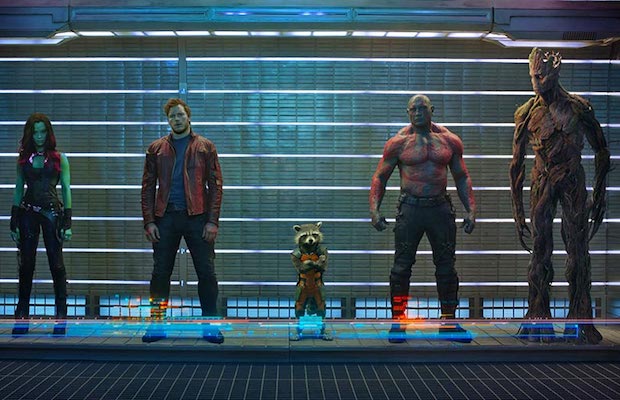 The film, part of Phase Two the same Marvel Cinematic Universe that includes franchises like The Avengers, Iron Man, and Thor, marks the studio's most cosmic effort yet. Guardians is set in space and revolves around an unlikely team of misfits, who are mostly aliens, banded together by a common enemy and circumstance; think of them more or less as The Avengers in space.

Take a look at the first trailer below:

Guardians features an ensemble cast, including Chris Pratt as Star-Lord, a human who has been living in space since childhood, Bradley Cooper as Rocket, a human-like raccoon, Vin Diesel as Groot, an anthropomorphic tree-like being, Dave Bautista as Drax The Destroyer, a ruthless warrior, and Zoe Saldana as Gamora, a reformed associate of the film's villains, along with Glenn Close, John C. Reilly, Benicio Del Toro, Lee Pace, Michael Rooker, Karen Gillan, Djimon Hounsou, Peter Serafinowicz, and more.

Per usual, the film will be produced by Kevin Feige, and marks James Gunn's largest directorial effort to date. The director's previous credits include Slither and Super. Guardians Of The Galaxy will premiere Aug. 1 of this year.

Though the exact plot of Guardians has not yet been revealed, the tag at the end of last year's Thor: The Dark World, which gave a first glimpse at Benicio Del Toro as The Collector, would suggest that Thanos, the presumed Big Bad for Avengers 3 (mind you, Avengers 2 won't even arrive until 2015, so we're talking 2018 at the soonest), has employed the help of Guardians' villain Ronan The Accuser (Lee Pace) to collect the Infinity Gems. The Gems, in turn, make up the Infinity Gauntlet, a weapon which grants its possessor virtually unlimited power. Given the brief synopses of Guardians divulged so far, it sounds as if the team will come into possession of an Infinity Gem, and will be forced to work together to protect it. The film is expected to crossover in some way with the larger Avengers universe in future installments, however it's unlikely any of the Guardians will show up in next year's Avengers: Age Of Ultron.

What do you think of the new Guardians Of The Galaxy trailer? Are you excited for the film? Let us know in the comments!