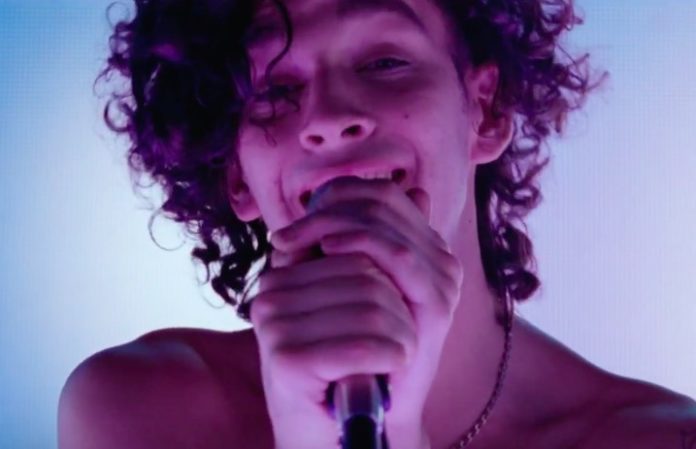 The 1975's frontman Matty Healy has changed his hair color once again and this time, he unveiled a new pastel green 'do. Of course, this new change has caused the internet to panic—us included.

Read more: New music from the 1975 might be coming in a “few more days”

We happen to love his new hair color and it looks like fans can't get enough of it as well:

GUYS I met fucking @Truman_Black on the streets of Manchester i look like shit but he was so cute and super nice he stopped for a photo and i hugged him nobody touch me! pic.twitter.com/ZrasVoKtG6

While Healy debuted this new hair choice a couple of weeks ago, that got us thinking…

As we know, the band have been teasing new music for a while now, and it looks like we'll be hearing this new music soon. This, of course, also means that we'll be learning what the new era is going to be, as promised by the band's manager, Jamie Oborne, who says that we might be getting a look at the new era in the next few days.

One fan shared a Tweet, saying the i like it when you sleep for you are so beautiful yet so unaware of it era is “still here.”

Does that mean we'll be getting an album announcement soon?!

The news follows Oborne's recent Twitter update, where he shared some info regarding the band's forthcoming record and touring plans, and it's safe to say: we're pretty excited.

He says that the band's first shows will be “the biggest live spectacle in the world,” and we wouldn't imagine anything less.

No we want the first shows to be the biggest live spectacle in the world x https://t.co/9uW7zpaaDL

While we're beyond excited to see the 1975 live, as of right now it's only UK dates…to start (Fingers crossed that U.S. dates will soon follow!)

Yes will be UK to start https://t.co/tzwDLosjHp

There might be a lot of confusion regarding the band's new album and era now, but Oborne assured that fans will be getting a lot of info on the band's plans in 2018.

And the band deleted months of posts from social media, with the last post showing the first official Music For Cars teaser, released July 14 of last year.

With all of this information, there's only one thing that we can think of: New music must be on the way.

Plus, with this new music, it looks like there will also be new live events. Oborne previously responded to a fan on Twitter, not necessarily confirming a tour for October—but confirming something “live-wise.”

Oborne also said they won’t be releasing tour news until the summer—”I would say around August.” (!!!)

We won’t be releasing tour news until the summer. I would say around August just so you have a chance to plan. X https://t.co/5NNsjNJB3d

In addition to all of these updates, back in January, frontman Matty Healy debuted his new, purple locks on Instagram. This, of course, had us wondering if this hair color could be his way of teasing that the band's next era is going to be purple hued, but now, we're wondering this a trick?!

Would it make sense to release Music For Cars on that day?

As previously mentioned, June 1 is the band's date, and it happens to be a Friday, when albums are typically released.

However, that date had previously been teased for the 1975's new EP, What A Shame.

This happened when a fan asked the band's manager, Jamie Oborne, on Twitter: “When can we expect the What A Shame ep.” And he responded with the most likely date any the 1975 fan would expect: “We are figuring out best plan now. The only date we have mentioned is June 1st. Xx.”

Of course, 1st June is the most important date for any fan of the 1975—whether the release date ends up being June 1 or not. (“What a shame” is a popular lyric from the band, too, popping up in the band's tracks “Love Me,” “Paris” and “The Ballad Of Me & My Brain.”)

There's a lot happening for fans of the 1975 and whatever they have coming, we’re so ready.

How excited are you for Music For Cars? Let us know in the comments below!