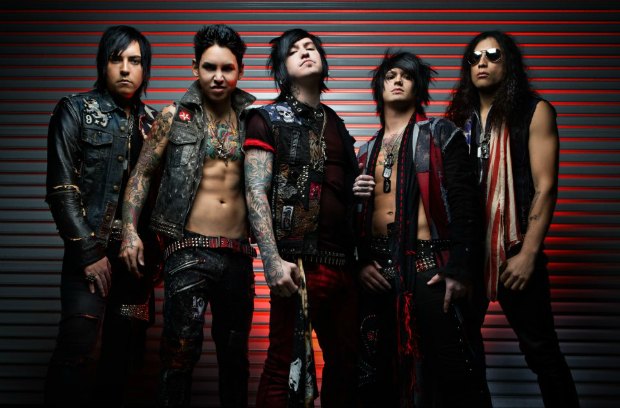 Escape The Fate have announced via Facebook that former bassist Max Green will be filling in on bass for the band's upcoming tour with Five Finger Death Punch, following guitarist Monte Money's alleged refusal to tour.

Bassist T.J. Bell will be taking on the role of rhythm guitarist for the tour in his absence. ETF insist that Green is not a replacement and there are no official lineup changes being made, but that they are only filling out their touring band for now.

Read the band's full statement below:

“hey guys, we know there has been some rumors going around so we wanna clear the air and give it to you the fans straight up, no bullshit or lies, so here it goes…

First and foremost you can be sure that we ARE still doing this five finger death punch tour! so, whats the problem you ask?

well, once again.. for what seems like the 100th time, Monte has refused to tour. he has let us down and left us hangin to find a replacement only a few days before our flights to the first date, this is not the first time we have been stranded without him. we are very upset but still would like to apologize to all of you for his actions. we have been let down just as much as you, the fans, have been let down.

Without airing out too much dirty laundry about this (yes, more details will surface very soon), there is something positive coming out of this situation! not only have we found someone more than capable to fill the roll [sic] for the road (not a replacement), T.j is going to be moving to rhythm guitar and we are excited to announce that Max Green will be returning to Bass!!! (which would have NEVER been previously possible because someone refused to tour if he was with us)

But on a good note, we are all very hyped for this tour and can't wait to see you all! once again we are very sorry to those of you who are upset about this news but our hands are tied on this one, i guess there's just never enough drama with this band, but the show still goes on! Thank you for your support.

In an AP-exclusive conversation with former bandmate Ronnie Radke, Green revealed that he attended rehab this year and is currently sober. Green and ETF originally parted ways in late 2011.