Is Mayhem Festival finally making a return in 2020?

Mayhem Festival might be making a comeback if a cryptic Instagram post means what the internet thinks it does. Started in 2008 by Warped Tour founder Kevin Lyman and his Taste of Chaos partner John Reese, Mayhem Festival brought a metal-focused package across the country for several summer runs.

In the wake of poor ticket sales, Reese announced the tour’s end the day after its final stop in Dallas, Texas in 2015. However, it looks like it could finally be making a return in 2020.

Following the tour’s demise, Lyman and Reese revived Taste of Chaos that year with the Used, Jimmy Eat World, the All-American Rejects, Dashboard Confessional and more. At the time of the announcement, Lyman and Reese exclusively chatted with AltPress about TOC’s return and Mayhem Festival’s fate.

When asked about TOC’s comeback and if a similar revival could happen for Mayhem, Lyman responded, “Maybe. I don’t know. You never say never right?”

The final run featured the Devil Wears Prada, Code Orange and more, but Reese reveals they still got backlash for the lineup when addressing a possible return.

“Man, we’re just out of the firing line with this,” Reese says. “We haven’t really had a debrief on anything as far as what we want to do, where we want to take it, if we want to take it… The biggest problem heavy music has right now is headliners, ultimately. You can’t play amphitheaters with this massive production without bands that are hard ticket sellers. There was all this B.S. about it being a shitty lineup this year – but trust me, we beat the streets for a lineup. We didn’t leave a single stone unturned. We’re going to let dead dogs lie. [Laughs]. We’ll see what happens in the future. Who knows what the future holds?”

In April of this year, Reese got all of our hopes up by posting one simple question to the festival’s official Facebook page: “Should it come back?”

Since Mayhem Festival’s demise, Lyman and Reese organized one more Taste of Chaos run in 2016. Lyman continued with Warped Tour until its final cross-country run in 2018 before celebrating with one last handful of 25th anniversary shows and a Rock & Roll Hall of Fame exhibit this past summer. Whle the shows wrapped up in July, the exhibit is still ongoing.

As for Reese, his promotion company Synergy Global Entertainment was behind this past summer’s inaugural Rockstar Disrupt Festival. However, significant loss from the festival, which canceled a handful of dates and downgraded venues, and the cancellation of Mad Decent Block Party Festival hit the company hard. SGE filed for bankruptcy in September, and Sumerian Records founder Ash Avildsen was listed as the company’s only secured creditor who loaned Reese $1 million on June 24 after SGE faced “a liquidity crisis” and “needed help.”

Now, three months later, the Mayhem Festival Instagram account has become active yet again. Sharing an image from the Rocky films, the caption reads, “don’t call it a comeback. #mayhem2020.”

In addition to the post, Mayhem Festival also updated its Instagram bio to read “hindsight is 2020.. and so is the return of mayhem. ?” It also includes the official Rockstar Mayhem Festival website, but when accessed, it currently features an error message.

One commenter mentions Reese’s previous reflection of fans not thinking the lineup was good enough by stating. “I wouldn’t call it a comeback,” the user writes. “I’d call it management fucking up and not getting good enough talent and now trying to fix their fuck up.”

Read more: Pantera have been approached about reuniting at Mayhem Festival 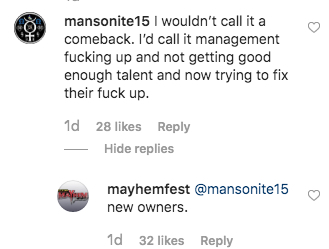 It’s unclear of Lyman and Reese’s involvement with the new reiteration, if at all. It’s currently rumored Avildsen will be involved in the relaunch. If true, the photo holds extra weight as the Sumerian Records founder’s father John Avildsen directed Rocky and Rocky V.

Sumerian launched in 2006, but before that, Avildsen began working closely with late Suicide Silence vocalist Mitch Lucker. Avildsen reflected on his time working with Lucker shortly after his death in 2012, pointing to Mayhem Festival as “one of [the] timeless moments” of their working relationship as he got to tell him he was touring with Slipknot for the festival’s first year.

Confirmation on Mayhem Festival’s official return and those involved is still pending. This post will be updated with details as they become available.