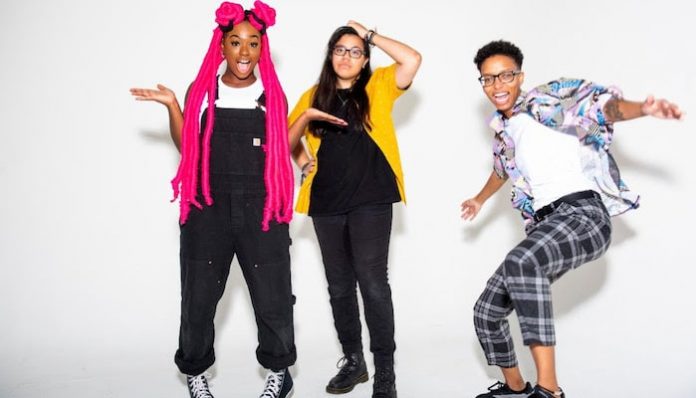 Rising pop-punk trio Meet Me @ The Altar are revisiting their single “Garden” in a beautiful new acoustic rendition.

To help make the release of “Garden (Acoustic)” even more special, Meet Me @ The Altar called upon their fans for a new collaboration. Together, the trio and fans produced a wholesome video filled with footage from listeners around the world.

It’s definitely been a whirlwind few months for Meet Me @ The Altar. After signing with Fueled By Ramen late last year, the pop-punk trio unveiled their latest single “Garden.” Since its release, the song has earned over 600,000 streams on Spotify while its video has been viewed almost 240,000 times on YouTube.

Back in November, Meet Me @ The Altar exclusively told Alternative Press why they decided to re-release “Garden” after signing to Fueled By Ramen. For them, they believe the message behind the single is more prevalent than ever amid the COVID-19 pandemic.

“It was out before and was really popular when we released it,” guitarist Téa Campbell said. “The Fueled By Ramen team felt very connected to it, as well. We love it, and we feel like it’s an important song for people to hear, especially right now with COVID and other emotional things happening. We want people to know there are people that are going to be there for you and to support you emotionally. We’ve all felt like people need to hear that we’re going to be there for you. There are people in your life who are there for you. And it’s OK to not be OK but know you have support around you.”

Now, Meet Me @ At The Altar are revisiting “Garden” in a new acoustic track. Last week, the trio debuted the stripped-down rendition along with a wholesome new video filled with fan-made footage. For the project, Meet Me @ The Altar asked listeners to submit clips of them to be included in the video.

As a result, the “Garden (Acoustic)” visual unites fans around the world during these difficult times. As well, it further shows the strong support Meet Me @ The Altar have earned over the years.

Meet Me @ The Altar further told Alternative Press in November that they are writing new music. For vocalist Edith Johnson, this new material is the band’s most mature yet.

Meanwhile, Campbell added that listeners will enjoy their new music regardless of if they are pop-punk fans.

“I know a lot of people will like it, whether or not they like pop-punk. It just sounds like good music. That’s because our earlier songs were written when we were like 16 and 17 years old. Now we are a little older with more experience, and it shows.”

What are your reactions to Meet Me @ The Altar’s “Garden” acoustic version? Do you like it more than the original? Let us know in the comments below.