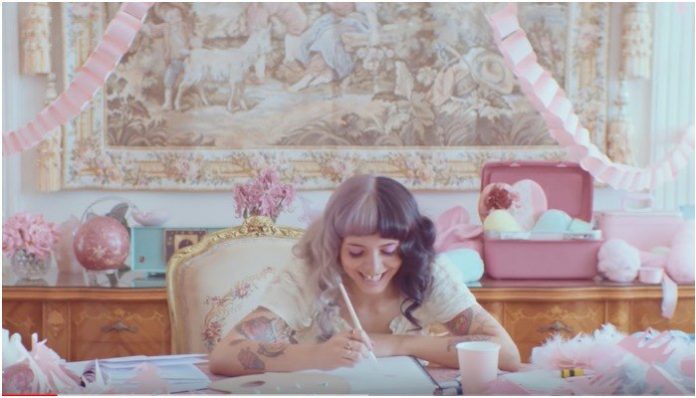 Melanie Martinez is giving fans a look into her thoughts and creative processes from childhood through the making of K-12 in Arts & Crafts with Melanie Martinez.

In partnership with YouTube Music, the series was created so the singer can explain how and why she makes her artistic choices.

Writer, director, and choreographer for her most recent LP and accompanying short film (she even held the title of journalist when she served as a guest editor for AP Issue #375,) the artist can, and will, do it all.

“I talk about the power of art and healing my inner child through the birth of creation,” Martinez tweeted with a link to the new video

Arts & Crafts episode with YouTube out now! 💕I talk about the power of art + healing my inner child through the birth of creation🧚🏼‍♀️
Watch now: https://t.co/IlPlWOBipE pic.twitter.com/CiDwV0R5xq

The video begins with the AP cover star jumping around a room, her opening sentence playing behind her.

“I notice that when I create, I realize that it’s the one time I’m tapping into that child self,” she states. “It’s less like, ‘If I could tell my younger self something it would be this.’ It’s like she has way more knowledge to offer me.”

Check out the first episode to Arts & Crafts with Melanie Martinez below!

More on Melanie Martinez and K-12

Melanie Martinez released a music video for her song “Show & Tell” from her recent album and accompanying full-length film K-12.

The video, filled with creepy themes and pastel colors, was taken directly from the film.

We see Martinez act like a puppet on a string in-front of her classmates who are cheering her on. The video often switches from showing the actual artist and a doll-version of her on strings in a box. While dancing like a doll, Martinez seems horrified to be the star of the show, which fits well with the lyrics of the track.

The class increasingly gets more excited about watching her perform in an almost obsessively creepy way. It ends with her collapsing and the kids throwing around the doll in glee, as if they’re happy they finally sucked everything out of her.

Check out the video for “Show & Tell” below.

Martinez is currently on tour with Lauren Ruth Ward and has partnered with PLUS1 so that $1 from every ticket sold will benefit The Trevor Project and their work providing crisis intervention and suicide prevention services for LGBTQ youth. Tickets are available here with dates below.

What do you think about the first episode of Arts & Crafts with Melanie Martinez? Let us know in the comments below!