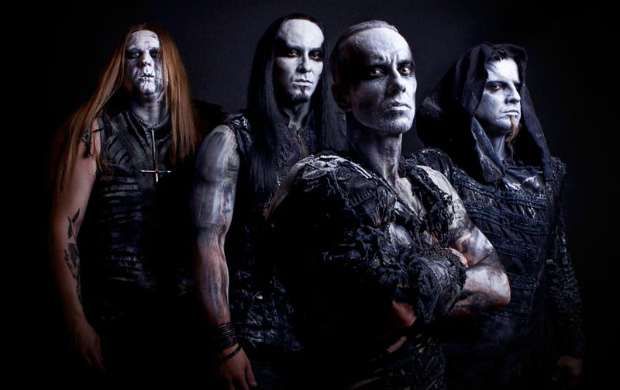 It looks like Polish metal band Behemoth (who are signed to Nuclear Blast/Metal Blade) have been detained by Russian immigration services (the Federal Migration Service). Band member Nergal posted a message to their Facebook account, detailing that there was a problem with the bands’ visas. Read the message below.

“We were detained by immigration services under the pretext of evil [I think he means they were accused of doing something wrong or having the wrong visas. -Ed.]. When we said we would not move from the club without the presence of someone from the Polish Embassy, they threatened us with force. They took us to the bus in the company of about ten officers of the FMS (Federal Migration Service). We tried to reach to the Polish Embassy in Ekaterinburgu, but no one picks up. If you can, please copy this message and to share it wherever you can. Now we probably have several hours of questioning ahead of. The concert certainly will not place. Now we just want to quietly return to the hotel and then get back to Poland.”

Not so bad translation via a fan:

“We've been stopped by the immigration services for 'wrong visas'. When I said that we will not move an inch from the club without someone from the polish embassy, they threatened to force us out. They took us in a bus, accompanied by 10 officers, to the building of Federal Migration Service. We tried to reach polish embassy in Jekaterinburg but no one is answering the phone. If possible – please copy this message and pass it everywhere you can. We may expect a multihour hearing. The concert is off for sure. The only thing we want is to get back to the hotel safely and then – to Poland. No matter how hard we try – we cannot pass it all. Regards. Nergal”

The band's concert in Russia tonight, obviously, may be canceled.

“Looks like it's going to be a normal arrest. They'll take our phones soon. At 9am we'll have a court case, then a judgement and maybe a deportation.”

UPDATE #2: After spending the night in jail, the members of Behemoth were ordered by a Russian judge to leave the country for violating the visa policy, Lambgoat reports. Each member was fined roughly $60.

Describing the conditions of their cell, Nergal said:

“It was a very small room about a half meter. The walls were smeared with feces. At night we asked to be taken to the toilet, but we were somehow denied. We had to go in plastic bottles.”

Below, you can watch a press interview conducted shortly after with Nergal—not because you’ll be able to understand what they’re saying, but so you can see the ridiculous spectacle of it all.