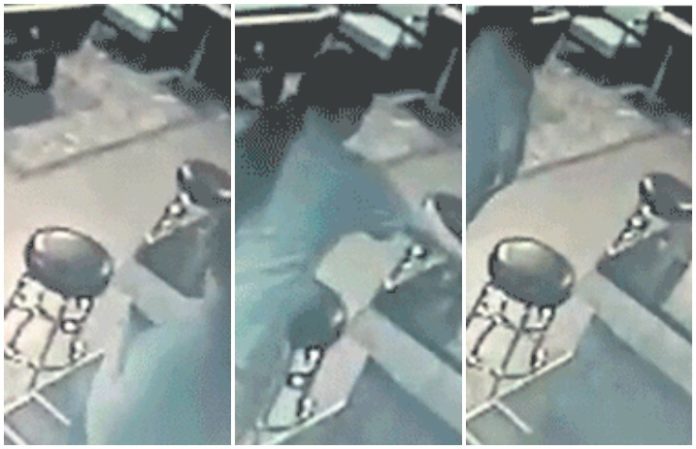 The drummer of metal band the Zenith Passage was caught stealing from a venue by a security camera, Lambgoat has reported.

During a show at Lookout Lounge in Omaha, a surveillance camera caught Luis Martinez, the Zenith Passage drummer, picking up an e-cigarette belonging to a venue employee named Walter Kovacs, and walking off with it.

That video is no longer available, but here's a GIF of the exact moment, posted by Lambgoat:

Here's the message posted with the original video:

“Someone from The Zenith Passage came in my place of employment at roughly 12:40am on tuesday looking for a lost wallet. In the process they STOLE my electronic cigarette, which retailed at well over a hundred dollars. I am angry. I have video evidence. Fuck liars, fuck thieves. Share this so promoters and fans know who they are dealing with.”

The Faceless, who headlined the show, then posted this in response:

“Walter, we are incredibly sorry for that member of The Zenith Passage's behavior. We had nothing to do with this, but we feel bad that it happened to you. Stealing is NOT something that we condone. We would like to purchase a new electronic cigarette for you, and give you free tickets to our next show in your city. Please email our manager, and we will send you money for a new electronic cigarette.”

The Zenith Passage offered this statement:

“Hey Walter, we assume responsibility for our drummer Luis taking the e cigarette. We had absolutely no idea what happened that night with him as he was drunk and has no memory of it happening, nor is it a true judgement of his character. We completely apologize. Please don't cast judgement on The Faceless as they had no involvement and also had no clue. Luis will be contacting you shortly for mailing address to send it back. Once again apologies and we hope you will forgive Luis and his dumb, drunken actions.”

And Martinez himself also posted:

“I take responsibility for my actions and deeply apologize. As was said I was black out drunk with no memory of what happened even though thats still no excuse and isnt a good judgement of my character. As we all know when people get black out drunk their judgement and decisions are no longer in the hands of your logical self. I'd also like to apologize to the venue and all of you just a mistake made by impaired judgement. Walter and I have made amends and have made arrangements to clear things up. The Faceless had nothing to do with this neither did my band mates.”

Lambgoat has reported that all parties have made amends—Martinez returned the stolen property, as well as an extra $200 as a peace offering.