Sure meme-master Oliver Tree was on the cover of last month’s AltPress. But presidential hopeful “metalcore” Bernie Sanders is the one that’s captured the blackened heart of the  underground.

The on-point folks at Terrier Cvlt get the mic-drop on this one. The company created a pro-Sanders shirt featuring a rendering of the Vermont senator in full piercing and gauge mode. The legend on the shirt reads “Bernie Sanders, Metalcore For All.” Proceeds from the shirts are being donated to Sanders’ campaign. The shirt was designed by Drew Kaufman, co-creator of the metal-based talk show Two Minutes To Late Night. You can get one for yourself right here.

The metalcore and hardcore scenes are having a blast trying to top each other with their Sanders support. The best ones feature Sanders rendered in death-metal hoodies or studded leather jackets making the claim that “Once again, I am asking you to open up this fucking pit” or asking for the cheapest beer. There’s also the memes where photos of the candidates are placed side-by-side, with drastic views on crucial things as the best [genre] record of all time.

On the surface, it seems like these moments are created by troll sweatshops whose workers are only slightly better in Photoshop than they are in personal hygiene. Yet the fact they’re using special cultural signifiers through the prism of American politics does account for something. The old school punks can have the candidates fight it out over best Black Flag singer. (Sanders could stump for Keith Morris after seeing FLAG, right?) Wonder what the new school would fight for? 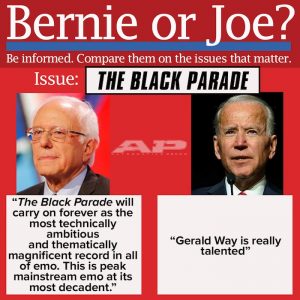