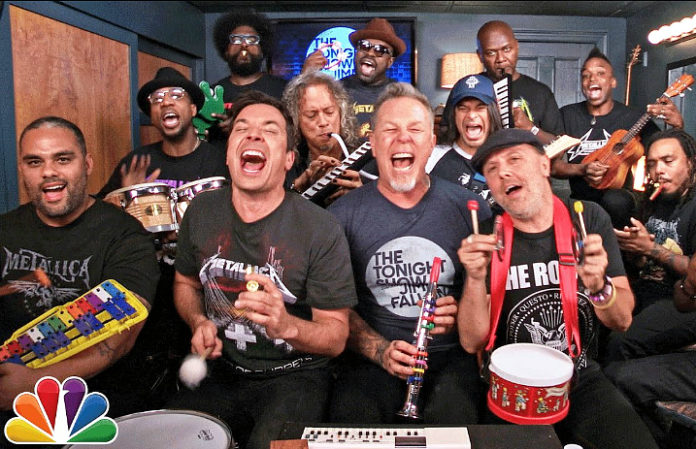 Last night, Metallica stopped by The Tonight Show Starring Jimmy Fallon, and the group filmed the most adorable segment with Fallon and the Roots, performing their hit “Enter Sandman” using toy instruments.

Check out their performance below!

The group was on the show in support of their new album Hardwired…To Self-Destruct, which is set to be released tomorrow, Nov. 18. (We couldn't help but point out that Metallica is repping their support for Fallon, while the Fallon crew is repping their Metallica gear.)

In advance of their new album, the band has released a string of music videos to give fans a sneak peek at every track on the record before it's officially released. According to Billboard, they tapped into a variety of directors for the project. Check out their video for “Dream No More” below.

In recent news, Metallica announced that they're putting their entire catalogue onto Napster, following Rhapsody’s merge with the file-sharing program a few years back.

What are your thoughts on the group's adorable rendition of “Enter Sandman?” Let us know in the comments below!

Metallica with Jimmy Fallon and the Roots: