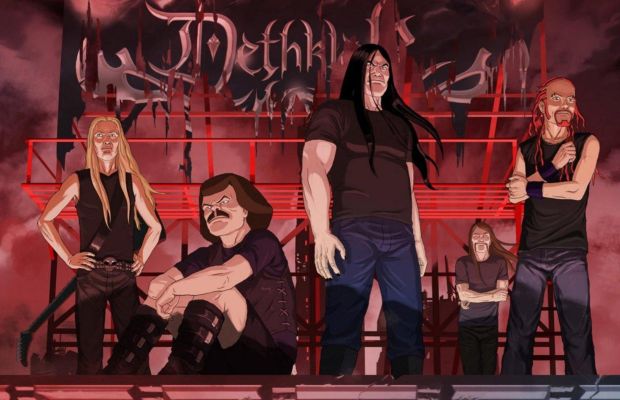 Metalocalypse, the violent animated series that follows the shenanigans of death metal band Dethklok, ran for four seasons on Adult Swim after originally airing in 2006. Spawning three Dethalbums and a one-hour special, the show—while never officially cancelled by Adult Swim—is in somewhat of a production purgatory, seemingly due to budget issues, with a planned fifth season never given the green light. The show's creator, Brendon Small, has since been brainstorming a way to get a proper finale released and in doing so has launched a campaign urging fans of the show (and Dethklok) to make it known to Adult Swim and Hulu that they would love for a true Metalocalypse conclusion to become a reality. While a full finale season seems unlikely, the show's long-awaited ending would probably be offered as another special or even a movie; the current title in place being Metalocalypse: The Army of the Doomstar – The Final Chapter.

Of the campaign, cleverly dubbed Metalocalypse Now!, Small explains, “'Metalocalypse,' to this day, has a ridiculously strong viewership. The show has become a part of the metal community and we want to give the fans an opportunity to demand what is rightfully theirs!”

Notable figures of the metal community including Scott Ian, Joe Satriani, Devin Townsend and Brian Posehn have already publicly stated their support for Metalocalypse Now!, along with various record labels and websites. Via a press release, details on how you can help are as follows:

To reach critical mass, fans should spread the word all month long by:

– Tweeting at @hulu and @adultswim with #metalocalypsenow

– Signing the petition at www.MetalocalypseNow.com

– Don’t use social media? Send an envelope with guitar picks and a note enclosed that tells HULU that if they finish Metalocalypse, you’ll watch it!

You can also check out the campaign's official website for more information on how to get involved. Start spreading the Dethsupport!