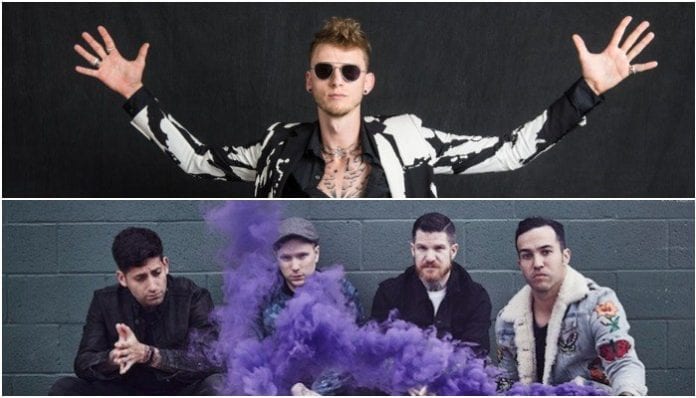 Machine Gun Kelly deserves an apology. Not only was he not booed offstage by enraged  Orlando, Florida, Fall Out Boy fans Sunday, it appears the video was doctored to include the booing. This was discovered by the rapper’s fans and through further research by AP’s team.

Billboard originally reported that Fall Out Boy fans booed Machine Gun Kelly’s performance of “Rap Devil” at Amway Center this past Sunday. The original post was uploaded to Southpawer Official, a site that has been in operation since 2015, describing itself as “the number one source for the Shady Records news.”

Videos taken directly from Instagram by fans at the show and other videos from YouTube do not capture any booing.

The video was a fake.
The audience booing was a mix of these two sound effects.
I posted the real video here along with the two sounds I believe they used https://t.co/9r6uXnbbA4https://t.co/qjPKwWQDeU pic.twitter.com/4TvwgIDdiU

We are currently trying to track down the original post where the edited booing originated as it is not confirmed if Southpawer Official was the first to post it.

MGK also responded to the doctored video on his Instagram story by posting the original footage with the hashtags #ACTUALFOOTAGE and #LETSTALKABOUTIT, the latter of which is a reference to “Rap Devil.”

Eminem surprise-released his Kamikaze LP at the end of August, taking aim at MGK among others in his track “Not Alike.” MGK responded with the release of “Rap Devil,” and Eminem most recently fired back with “Killshot.”

Eminem has been under fire for comments made on his new record regarding his use of a homophobic slur toward rapper Tyler The Creator, and singer Troye Sivan recently commented on it.

On the flip side, MGK has shown support for the LGBTQ community, speaking out in support of the legalization of gay marriage in 2015.

Fall Out Boy fans are not too keen on Machine Gun Kelly’s recent antics. While opening for the sweet Chicago pop-punk band, MGK wore a shirt with the single artwork for “Killshot” on it, proceeded to play his Eminem diss track and then got booed by thousands of angry FOB fans, according to Billboard.

As tensions continue to rise, MGK and Eminem are only fueling the fire. Most recently, Machine Gun Kelly wore a shirt sporting the “Killshot” logo while opening for Fall Out Boy at their Orlando show. The Cleveland rapper then asked fans hold their middle fingers up to take a photo for Instagram.

However, it wasn’t just any photo; It was actually the same photo that made fans spit out their cereal yesterday morning. Contrary to popular belief, some Fall Out Boy fans are claiming that the crowd wasn’t flipping off Eminem in support of MGK. Instead, they may have been conned into a “supportive-looking photo” without their knowledge.

Needless to say, FOB fans are not happy about potentially being used for Instagram clout. Fans claim that the rapper came out with a jacket that covered the “Killshot” artwork and asked them to pose for the photo. While turning around, the rapper removed his jacket, only then exposing the logo.

Asking FOB fans to hold their middle fingers up just to make it seem everyone is showing it to Em while you’re the one booed till the very end while performing Rap Devil? #LetsTalkAboutIt @machinegunkelly

#mgk how did you get booed off stage. Let’s count the ways… You faked the photo, you performed a diss track when you could have performed any other of your “hits” and then you said fuck Em! FOB fans don’t want part in your drama sir!

Let’s be clear- this was a @falloutboy concert. We were NOT there to see @machinegunkelly. I repeat, we were NOT there for MGK. I would never voluntarily see this asshat. What you don’t see/hear is people booing him and not participating in this BS. @Eminem pic.twitter.com/eTiss2d6Xj

Following the big reveal, the rapper was booed for playing his Eminem diss track “Rap Devil.” Watch the drama unfold below.

MGK is currently opening for Fall Out Boy on their M A N I A tour.

What do you think about MGK’s most recent controversy? Sound off in the comments below!