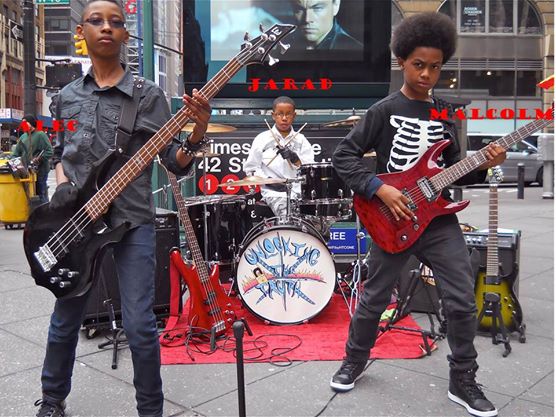 Brooklyn, New York based middle school metal trio, Unlocking The Truth, have inked a record deal with Sony Music potentially worth $1.7 million, according to a report from the New York Daily News. The band are guaranteed two albums, with a $60,000 advance on the first, and up to $350,000 for the second. If the efforts prove fruitful, the band could reap the full benefits of the six-record, million dollar-plus contract.

Comprised of 13 year old guitarist, Malcolm Brickhouse, 13 year old bassist, Alec Atkins, and 12 year old drummer, Jarad Dawkins, Unlocking The Truth began making waves after a video of them performing in Times Square made its way around both inside and outside of the metal community. Dawkins' mother, Tabatha Dawkins, spoke with the New York Daily News on the boys' opportunity saying, “What started out as play dates went to Times Square, and now this. It’s been one great thing after another.” She added in regards to their schooling, “School work comes first. If their school work is not done, they don’t play.”

Watch the group performing in Times Square below.