Horror movie fans will remember Ari Aster’s 2018 nightmare Hereditary. It was an incredible film with a trailer that scared the absolute hell out of us. Now, Aster is back for a follow-up film that is sure to leave us with even more nightmares. Check out the first trailer for Midsommar below!

Don’t let the bright lighting of this trailer fool you. Aster’s festival-based film looks like it will be every bit as scary as Hereditary.

Starring Jack Reynor, Florence, Pugh, Will Poulter, and William Harper, Midsommar is set to follow a couple as they head to Sweden for a festival that takes place once every 90 years.

It’s not long before their quick retreat devolves into violence at the hands of a pagan cult.

You can check out the film’s poster below. 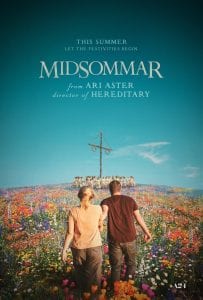 The film is currently slated for an August 9, 2019 release date.

Check out the trailer below, and be sure to keep this one on your radar.

Ari Aster’s Hereditary was nominated under multiple categories at the 2019 Fangoria Chainsaw Awards.

And if you need a refresher on the Hereditary trailer, you can check that out below:

We love a creepy cult classic.

Are you excited for Midsommar? Sound off in the comments below!