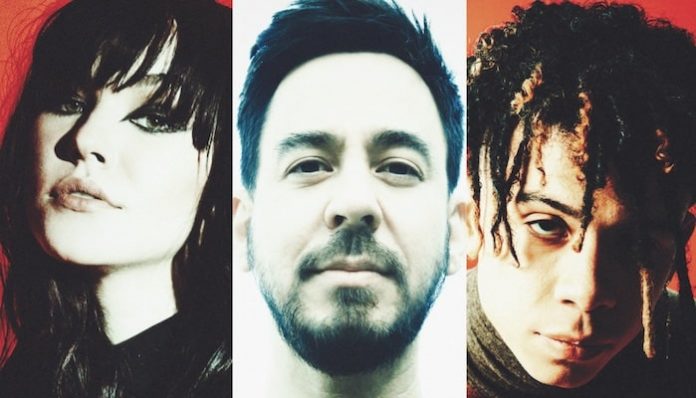 Last month, Mike Shinoda made history with his new single “Happy Endings” which features iann dior and UPSAHL. After its debut, Shinoda became the first major label artist to successfully launch a single through NFT Auction. All of the proceeds from the auction were donated to the ArtCenter College of Design in Pasadena, California.

Now, the trio are raising money for another cause with their colorful new ’90s-inspired video for “Happy Endings.” Through the lively visual, donations are being collected for MusiCares‘ COVID-19 Relief Foundation.

For the “Happy Endings” video, Shinoda teamed back up with dior and UPSAHL. Directed by PIX3LFACE (Skrillex, the Used, Steve Aoki), the dynamic visual was shot in downtown Los Angeles and features some throwback cartoon animations that were hand-drawn by Shinoda.

Alongside UPSAHL’s strong emotional hooks and dior’s distinct vocals, Shinoda brings his own signature rhymes fans will instantly recognize. Together, the trio created a powerful genre-bending collaboration that flows together seamlessly all while set in front of an urban backdrop.

The new video was launched as part of MusiCares’ COVID-19 Relief Foundation. Through their partnership with the Recording Academy, the organizations aim to support musicians and artists struggling as a result of the global pandemic. Fans are able to donate through the “Happy Endings” YouTube video link or can direct their donations here. So far, the video has raised over $500 for the cause since premiering on Thursday.

Along with MusiCares, Shinoda, dior and UPSAHL also raised money for the ArtCenter College of Design with “Happy Endings.” Last month, Shinoda launched the new collab through NFT Auction, an avenue of selling digital art that has grown in popularity over recent months.

Non-fungible token (NFT) is a cryptographic token that is made up of unique information that cannot be interchangeable, unlike the cryptocurrency Bitcoin. Most NFTs are part of the Ethereum blockchain and can really be anything in a digital form such as paintings and music. These days, the technology is largely being used to sell digital art, making all of this a new way of collecting.

For the “Happy Endings” auction, Shinoda collaborated with contemporary artist Cain Caser who created 10 animated artworks that were accompanied by a 75-second clip of the new song. The pieces were then sold through the online marketplace Zora.

Shinoda told Input Mag that the bids for the “Happy Endings” pieces really varied in price. One of the art pieces did sell for 5 Wrapped Ethereum (WETH) which is equivalent to around $8,000. Meanwhile, the lowest bid was for a couple of hundred dollars. After the auction closed, Shinoda gave the winners a chance to resell the digital art pieces by announcing he would be personally signing art prints for them.

“As soon as the initial sales were over, I said, ‘Surprise, everybody who owns one as of tomorrow is going to get a signed, one-of-10 print of the art. So you have 24 hours if you want to resell it. But whoever owns it at this time tomorrow gets a print,'” Shinoda told Input Mag. “I kind of expected somebody to go to the person who only spent 200 bucks and be like, ‘I will give you $15,000 for that NFT that you spent 200 bucks on.’ I expected it to change hands. And it didn’t change hands.”

Although Shinoda is the first major label artist to successfully launch a single through NFT Auction, he certainly won’t be the last. Over the past few months, various creators have been getting more involved in the cryptocurrency art market.

Earlier this month, Grimes launched a cryptocurrency art collection that featured one-of-a-kind art pieces. She even included a few unreleased songs from her possible upcoming album in some of the digital artworks. In the end, Grimes‘ auctions grossed nearly $6 million in just 20 minutes.

As well, Kings Of Leon are the first band to ever release an entire album as an NFT. On March 5, the band put out their new LP When You See Yourself in the form of a non-fungible token. Meanwhile, Shawn Mendes also recently launched a collection of digital goods as NFTs.

Based on the past success of these NFT Auctions, it’s no surprise the tech is becoming more popular each and every day. In fact, Shinoda already has more artwork up for auction on Zora.

Last year, Shinoda didn’t let the global COVID-19 pandemic keep him from making music. In fact, he found a way to connect with his fans more than ever during a time when most felt disconnected.

Every morning, he took to Twitch and social media to livestream and teach music production. As well, he teamed up with his fans to produce new tracks using both their ideas and feedback. As a result, Shinoda put out three Dropped Frame albums, each compiled of songs created on Twitch.

“Every day I was coming to the studio and making stuff,” Shinoda exclusively told Alternative Press in July. “At one point, I realized I just needed to connect with people. So I turned on my phone and went live on Instagram and shared that writing session with the fans. They loved it, and the chat was really fun and vibrant, so I did it again.”

Amid all of this, Shinoda also helped celebrate the 20th anniversary of Linkin Park‘s debut album Hybrid Theory. After dropping some throwback merchandise, they sent fans on a cryptic scavenger hunt before releasing the Hybrid Theory demo “She Couldn’t.” Shortly after, they also released an early version of “In The End” which is one of many unheard demos off of the Hybrid Theory (20th Anniversary Edition).

Of course, Linkin Park weren’t the only ones celebrating the Hybrid Theory anniversary. FEVER 333 frontman Jason Aalon Butler and grandson debuted renditions of two classic songs off of the album for Spotify‘s Singles series. As well, producer and keyboardist Jordan Fish revealed just how much Hybrid Theory has inspired Bring Me The Horizon‘s upcoming music.

“Even with the record we’re doing right now, we still reference them,” Jordan Fish told NME last year. “They’re [Linkin Park] one of those bands that I always have in the back of my mind when we’re thinking about where a song should go next. It’s the Bible for heavy, catchy music that combines electronic and pop music, which is our brief. They just covered so much ground and did it with such class on that album.”

Read more: Cardi B is the first female rapper to achieve this major music milestone

As for dior, he’s been staying very busy this past year, too. Last year, he joined forces with Travis Barker and Machine Gun Kelly for “Sick And Tired,” off of dior’s new album I’m Gone. Not long after, he collaborated with the duo again for “nothing inside,” off of Tickets To My Downfall. In September, he also joined Carlie Hanson on her politically-charged single “Ego.”

Although this past year was full of explosive collabs for dior, he also took part in plenty of other projects. He appeared alongside MGK, Tommy Lee and 24kGoldn among others for the musical podcast HALLOWEEN IN HELL. For the podcast, dior was featured on various songs including “Empty Souls” and “In Hell It’s Always Halloween.”  Last month, dior also starred alongside phem, Tyler Posey, Oliver Tree and jdxn in another musical podcast called Valentine’s Day In Hell.

Read more: Silverstein, PUP and Dizzy are among the 2021 JUNO Awards nominees

For UPSAHL, “Happy Endings” isn’t the only new collab she’s released this year. In fact, 2021 has already been pretty busy for her. Earlier this month, she collaborated with DREAMERS and Big Boi on “Palm Reader.” As well, she revisited her song “Drugs” for a new collab with blackbear and debuted her sole single “STOP!” this year.

All of these tracks follow up her 2020 EP Young Life Crisis which was released back in October. As it turns out, the new EP was a result of the COVID-19 crisis. Last November, UPSAHL told Women In Pop how coronavirus lockdown led her to write the latest release.

“I’ve learned more about myself this year,” she told Women In Pop. “I’ve grown more as a person than ever before. 2020 has sparked an existential crisis for all of us, so here’s mine. 21-years-old, trying to figure out what the fuck I’m doing, and raging through it all.”

What are your reactions to Mike Shinoda’s new video with iann dior and UPSAHL? Let us know in the comments below.