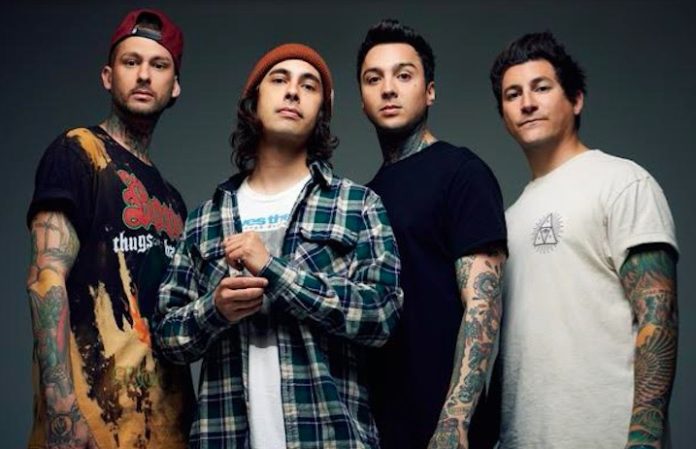 Pierce The Veil have announced that drummer Mike Fuentes will be taking a break from the band after sexual misconduct allegations surfaced online. The band have also announced they will be dropping off their upcoming U.K. tour with All Time Low.

“I’m of course aware of the allegation made about me from almost 10 years ago, and I cannot begin to describe how difficult and disturbing this entire situation has been for everyone involved,” Mike Fuentes shared in a message on Facebook.

“I also want to assure you that I have never intentionally manipulated or abused anyone in my life. That is not the person I am, how I was raised, or the type of behavior that I condone. I strongly believe in the empowerment of abuse victims, so if I have ever made anyone feel like they are less than equal, I am sincerely sorry.”

Read Pierce The Veil’s statement in full below:

From the day we started this band, the four of us agreed that we not only wanted to write and play songs together for the rest of our lives, but we also wanted to build a strong community through our music and provide a safe place for ourselves and our fans to express our shared values through creativity, open-mindedness, love and respect. Over the last ten years we have accomplished that and so much more with the help of our incredible fans. The bond that we share in this community is stronger than we could have ever imagined and is truly our pride and joy.

Recently, an allegation was made about Mike from an anonymous source pertaining to events dating back nearly ten years ago. We are taking this allegation seriously and would like to share the steps we are taking in response. Below are a few words from Mike.

“I’m of course aware of the allegation made about me from almost ten years ago, and I cannot begin to describe how difficult and disturbing this entire situation has been for everyone involved. I do not take this allegation lightly and would never downplay it. I have empathy for any human being who has experienced abuse or mistreatment in their lives, and I am inspired to see so many come forward and speak out about it. No one should have to suffer in silence, and I am thankful that the world is finally starting to listen. I also want to assure you that I have never intentionally manipulated or abused anyone in my life. That is not the person I am, how I was raised, or the type of behavior that I condone. I strongly believe in the empowerment of abuse victims, so if I have ever made anyone feel like they are less than equal, I am sincerely sorry.

I love playing music more than anything on earth, and I am constantly humbled by the support of our fans. I do not want the allegation surrounding me to negatively affect the reputation or future of the band, or to break the bond and trust that we have created with our fans over the years. So, I have decided to take a break and step away from my position in the band in hopes that this will allow my band mates and fans to continue focusing on the music and message that Pierce The Veil stands for. Though I am far from perfect, I do have a moral compass and try to stand up for what is right. While away from the band, I will continue to work hard to live my life in that way.”

Since the allegation first surfaced, our band has discussed how we can ensure the PTV community is always a safe environment. We’ve made many efforts over the years to protect our fans, and we can and will do more. We believe in creating spaces where people can seek help for any issues they are struggling with and provide resources and tools to help.

As a band, we are respecting Mike’s decision to take break and step away. Unfortunately, without a core member of the band, we will be respectfully withdrawing from the upcoming U.K. tour with All Time Low. We promise our fans that we will be back again very soon.

Last month, an anonymous allegation of sexual misconduct was made against the drummer. A Tweet was posted Nov. 14 where a woman claimed she had a sexual relationship with Mike Fuentes when she was underage.

one of my closest friends finally feels safe enough to speak out about her misconduct. it's been ten years.
this stuff needs to stop. i'm tired of guys in bands thinking they have some sense of entitlement to younger girls.
pierce the veil. pic.twitter.com/ra8Jxiy03C

hi, here's receipts for all the skeptics! pic.twitter.com/qWAGgwHv3O

my friend had this in her email to use as proof if * ever tried to drag her into it. she did NOT want to come out about it. which is why she waited ten fucking years. pic.twitter.com/71woun1JJB

In the statement, the woman says she and Mike stopped speaking in 2010: “I could go on about all the times we did it and got naked on AIM messenger's iChat… But to save time, as this lasted until I turned 18, I won't go into detail. We stopped speaking in 2010, after a really drunken night put me a very weird position with him. I was embarrassed, I'm sure he wanted nothing to do with me. And here I have been holding on to this abuse of power for nearly ten years.”

Another woman, Shannon Bray, spoke with Loudwire about the interactions she had with Fuentes as a minor.

SO glad these grimy band dudes are finally getting what they deserve. mike fuentes used to be a total creep to me when i was 14/15, would hold my hand, ask me to date him, and would ask me to send “pics” etc.

“I went to Warped Tour and met Mike at their signing. I said, 'Oh my god, I’m a big fan.’ He’s like, 'Cool, are you doing anything today? Do you want to hang out?' I remember ditching my friends, holding his hand and walking around Warped Tour. I was 14,” Bray says.

Bray says the two exchanged numbers and began communicating via text. “…he’d always say things like, 'I was too nervous to kiss you, but next time I will.' He never kissed me or anything; the furthest he went was holding my hand. We hung out until I was 15, still never doing anything other than holding hands,” she said in the interview. “I remember him texting me, 'I have a question for you. Will you date me? You should send me pics ;).’ I specifically remember not knowing what he meant, so I sent him a picture of me smiling. And then he said, ‘No, not that kind of pic,’ and then I didn’t respond. Our relationship fizzled out, we didn’t talk after that.”

This news follows a sea of allegations against various musicians, including Brand New’s Jesse Lacey, Pinegrove's Evan Stephens Hall, former With Confidence member Luke Rockets, With Confidence frontman Jayden Seeley and others, along with Artery Recordings announcing that they have decided to drop Slaves from their roster with multiple assault allegations against frontman Jonny Craig surfacing online.