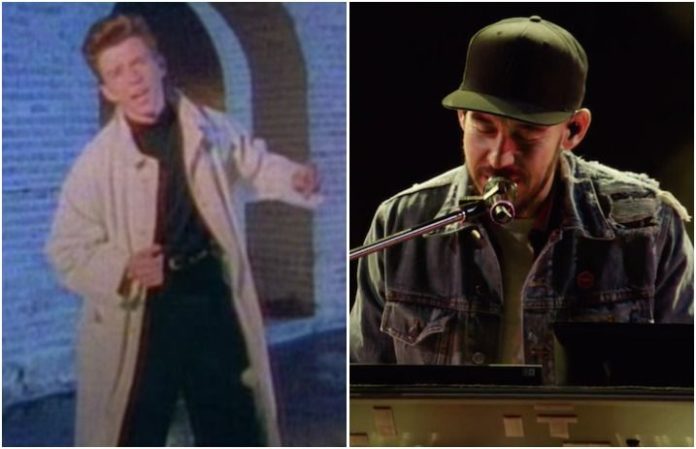 Mike Shinoda and Rick Astley just shared a pretty epic moment on Twitter. (And it's not a Rickroll, we promise.)

Read more: Dave Grohl explains why he and his bandmates rickrolled the Westboro Baptist Church

One fan noticed that both Shinoda and Astley have similar ranges (and suggested Shinoda Rickroll a crowd… Which we'd be down for):

Today i learned that @mikeshinoda has almost the exact same range as @rickastley lol. They are also both Baritone vocalist.
Mike's range is between F2-E5!
Rick's range is between E2-E5!
Now i want to see Mike perform “Never Gonna Give You Up” and RickRoll the entire crowd. ��

And Shinoda's response is all of us:

Then Astley himself joined in and recommended the unexpected: A double album of Norwegian folk songs.

Shinoda agreed—and also asked for a signed photo. (Truly, we're not the only fangirls at heart. Even the Mike Shinoda freaks out every once in awhile!)

Norwegian folk songs are my favorite kind of folk songs. Also, can I get a signed photo? Our bass player @phoenixlp is a big fan, and his birthday is coming up.

Can we expect a double album of Norwegian folk songs anytime soon? Maybe not. But we will be hoping for a Rickroll from Shinoda sometime soon.