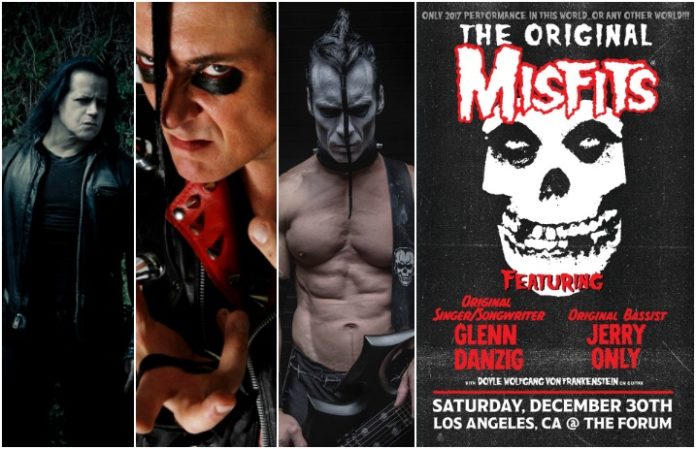 Misfits will (once again) walk among us for their sole 2017 reunion show later this year! Founding members Glenn Danzig and Jerry Only will join longtime guitarist Doyle Wolfgang Von Frankenstein as the Original Misfits for “the first time in over 30 years” this December. Check out the details below!

Read more: The inside of Danzig's house is bizarre AF—these photos prove it

The special, one-night-only gig goes down on Saturday, December 30, at the Forum in Los Angeles, following the legendary horror-punk band's two historic reunion shows that happened last year at the Riot Fest in Chicago and Denver.

“OK, Los Angeles, you've waited almost 35 years for this; here's your chance to see the 'Original Misfits' in this exclusive L.A.-only performance.” says original Misfits singer-songwriter Danzig. “No tour, no B.S., just one night of dark, metal-punk, hardcore brutality that will go down in the history books.”

Original bassist Jerry Only adds, “The Misfits were so far ahead of their time when we began back in 1977, that it took the world 40 years to catch up. That time has come, and that time is now. We intend to take you on a ride back in time, and into the future to experience 100% authentic punk rock at its essence, and the origin of thrash in its purist form. History will be made—again.”

“Prepare to be devastated.”

Tickets are available here via Ticketmaster.