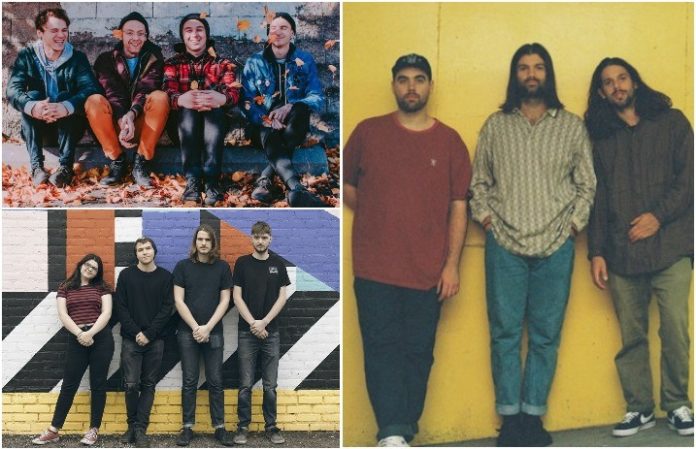 Watch new music videos from Lumes, Flashers and more—plus, don’t miss new songs from Charmes and the Sonder Bombs. Check out the news you might have missed today below!

Read more: Panic! At The Disco appear to be getting ready for something—literally

Portugal. The Man, Turnover and Bon Iver are just a few acts announced for this year’s Mo Pop Festival. The festival is set to take place July 18 and 29 in Detroit at West Riverfront Park. Tickets go on sale this Friday at 10 a.m. For tickets, you can go here!

The Chicago-based trio announced that they are joining the Equal Vision family. The band also dropped a black and white music video for their song “Keep Me Under.” The track is taken from the band’s upcoming album, Wrung Out. It’s out April 20, and you can get your copy here! The band are currently on tour, and for a full list of dates, you can go here.

Cleveland’s own “uke-punk” band the Sonder Bombs premiered a new song, “Shitty Boyfriend.” The song is all about overcoming heartbreak and not forgetting who you are. Plus, the band will be heading out on a few headlining dates. You can snag your tickets to the shows here, and you can check out the dates below!

Charmer have premiered their newest single, “Starship Tina.” The song is taken from the band's upcoming album, Charmer, out April 20 via No Sleep Records. You can grab your copy of the record here!

5. The Most Dangerous Animal premiered a music video for their new song

The Most Dangerous Animal slowed it down a bit with their new song, “Through Hell.” The track is taken off the band’s upcoming album Hot Brain, which is due out March 9. You can snag your copy of the album here.

6. MORI covered a song in honor of International Women’s Day

Happy International Women's Day! I covered @KeshaRose's “Woman” cuz it's a power anthem and I wanted to punk it up good. Stream it: https://t.co/3PHPjKZdYI #KeshaWoman pic.twitter.com/zEtQm0ottN

MORI shared their punk-infused cover of Kesha’s song “Woman,” which was released in celebration of women all around the world. MORI will also be celebrating the release of her last single, “All My Girlfriends Have Boyfriends,” at a concert featuring an all-female opening lineup. You can get your tickets to the March 21 show here!

Flasher have released a music video for their song “Skim Milk.” There’s not a lot of detail in regards to the band’s new album, but we do know one is coming. In the meantime, you can snag your copy of the single here! The band will be touring with Ought later this month and the Breeders in April. You can check out the dates for both tours below!

8. The Unlikely Candidates shared a new music video for “Oh My Dear Lord”

The Unlikely Candidates premiered a music video for their song “Oh My Dear Lord.” The song is available now, and you can get your copy here!