Amid the coronavirus pandemic, festivals and large-scale shows won’t be resuming in the United States for a while. Now, thanks to the website Monkeon, music lovers can generate their very own ’90s festival lineups.

Read more: Kanye West is reportedly dropping out of the 2020 presidential race

Last year, Festify connected with Spotify to launch its own festival lineup generator. Using listeners’ data from the streaming platform, the app created personalized festival bills based on streaming habits.

Now, Monkeon is using Spotify data to create its own ’90s festival lineups. Using modern-day technology and streaming figures, Monkeon is creating 2-day festival bills for anyone that visits the site. However, the order of the lineups are not random. Monkeon is ordering the bands according to their streaming numbers on Spotify. 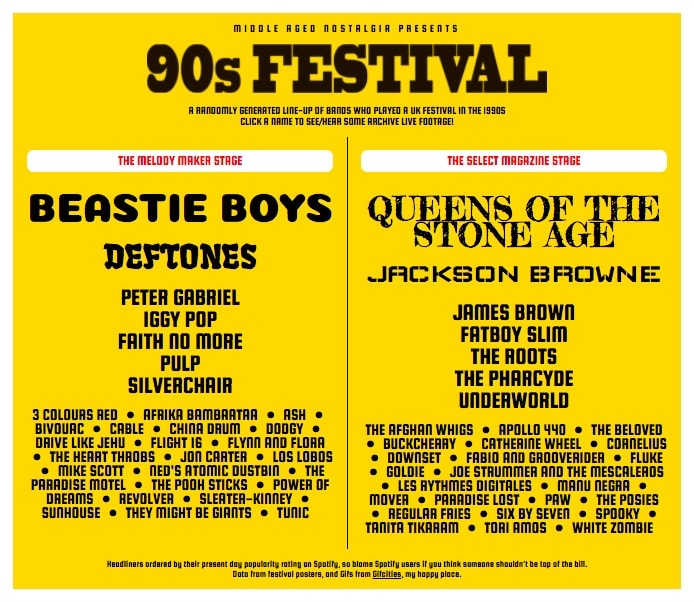 Once a festival lineup has been generated, viewers can click on the artists’ names and be taken to videos of their ’90s performances. For example, the Beastie Boys link takes viewers to a video of their 1992 Reading Festival set. As well, Deftones fans are taken to their 1998 Glastonbury performance of “Be Quiet and Drive (Far Away).”

The website is completely free to use and helps give music listeners their daily live music fix while they wait for shows to resume.

Which ’90s bands appeared on your generated festival lineup? Let us know in the comments below.