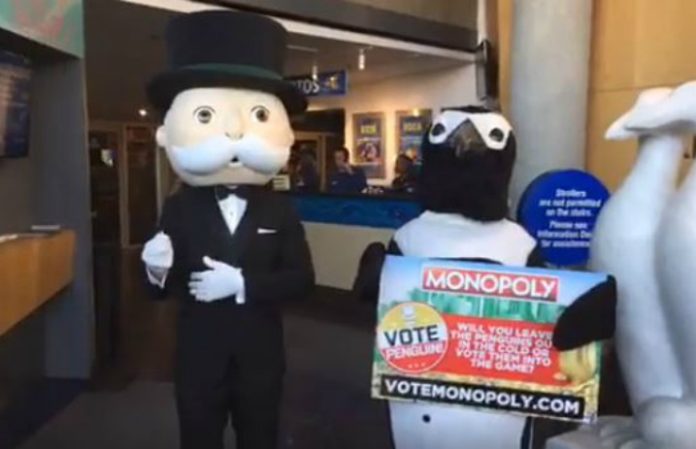 Monopoly is the kind of game you only pull out when the power's out and your phone is dead, but the board game that's been around since 1935 is going to feature three new pieces.

In January, Hasbro offered board game fans the chance to vote among 64 different pieces to pick the new eight that would be featured in Monopoly. Among those 64 pieces featured the classic eight already in the game, including the brand new cat that was added in 2013.

Check out all the pieces that were voted on below.

While the official announcement of who the new pieces would be was supposed to be made on National Monopoly Day (3/19), Hasbro decided to break the news early revealing that the penguin, the rubber ducky and the T. Rex would be replacing the thimble, the wheelbarrow and the shoe.

Of course just like any election, there was some intense campainging from sides wanting to see their candidate win. The New England Aquarium hosted Mr. Monopoly (top hat and all) to visit the penguins at their aquarium through a live stream on Facebook to show potential voters just how cute these penguins are and why they should be immortalized as a Monopoly piece. Check out video below!

These new pieces will be featured in the game starting this Fall.

Will you miss any of the old pieces? Did anyone actually use the thimble? Let us know in the comments!