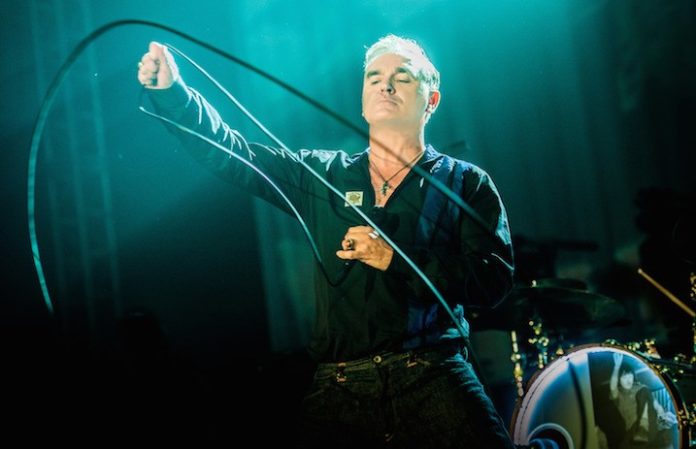 Morrissey is known for his choice actions and words, so it might not come as a surprise that he was interviewed by the Secret Service here stateside after saying he would press a button to have Trump dead “for the safety of the human race.”

In the original interview with German magazine Der Spiegel, he said: “Since he [Trump] was in power, he has exhausted the world. He grabs after everything like a little child. He is not a leader. He is a vermin. A huge vermin,” as translated from German to English.

And, as NME reports, when asked: “If there was a button here and if you pressed on it, Trump would die dead – would you push it or not?,” Morrissey replied: “I would, for the safety of the human race. It’s not for my personal opinion of his face, or his life, or his family, but in the interest of the human race. I think he’s a terrible, terrible scourge.”

In response to those happenings, he released an eight-minute video, properly (or not so properly) titled “Morrissey’s State Of The Union Address,” that calls out the “haters” and explains how he had to chat with the secret service on his U.S. tour.

“So congratulations, Der Spiegl. You achieved everything that you set out to do. Whether again I’m allowed free access to America, I really don’t know. I have to wait and see if I can enter the country again. If I can’t, I have to say very sincere thanks to everyone who supported me in the U.S.

“In one week, Los Angeles announces Morrissey day, and then a week later I’m being cross-examined by the Secret Service.”

Watch the full, er, State Of The Union address below:

Of course, Morrissey has had an interesting past few weeks, canceling his KROQ Almost Christmas Acoustic performance, bringing his total canceled or postponed number of shows to 127 since 2012. And the audio release from said Der Speigl that confirms he defended Spacey and Weinstein—even if he still denies it.

What are your thoughts on the Morrissey situation? Sound off in the comments below.