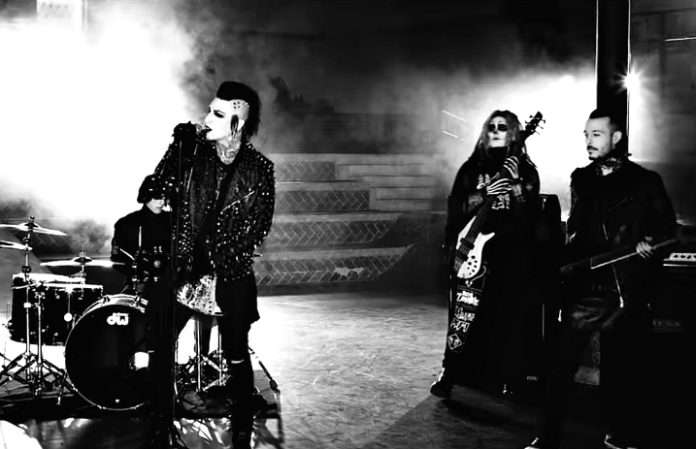 Ahead of the release of their new album, Graveyard Shift, Motionless In White have released a music video for their new track “Loud (Fuck It)”.

Check out the powerful video below.

In addition to the release of the new music video, the band released the cover art and track listing for the new album, which is set to drop May 5 and feature guest vocals from Korn singer Jonathan Davis.

Frontman Chris Motionless provided some background on the new track via a post on Twitter, saying that the lyrical content of this song is very personal for him.

“For a few months now I have been speaking in interviews of having written a song that was inspired by my summer of 2016 spent on The Vans Warped Tour participating in a daily event that I had no idea would change my life forever,” he writes, talking about the TEI Workshops he was a part of.

“I never thought stepping into one of these workshops that I would witness such immense heart, strength, bravery, pain, happiness, kinship and release amongst a group of people who were predominantly strangers prior to these meetings. Together we built a world of our own in which some people who have rarely felt free to expres their feelings bared a new level of vulnerability and revealed their most inner personal triumphs and dilemmas… I sat in disbelief hearing what so many people have gone through and experience every day.”

“With that being said, ‘LOUD (Fuck It)’ is a summation of the many points that were discussed each day, and highlights the general consensus that each one of our groups came to at the end of each meeting. There’s not always a perfect polished answer for all of the issues we face everyday… You need to take all the set backs, take all the pain, take all the fear, and look at yourself in the mirror and say FUCK IT, and make the absolute best out of it.”

Read more: 10 songs for the blasphemer

Give the song a listen, and check out the cover art and full album track listing below. The album is available for preorder here.

What are your thoughts on the video and message behind “Loud (Fuck It)”? Let us know in the comments below!

Watch more: “We’re just trying to do it right”—Motionless In White on new album due early 2017