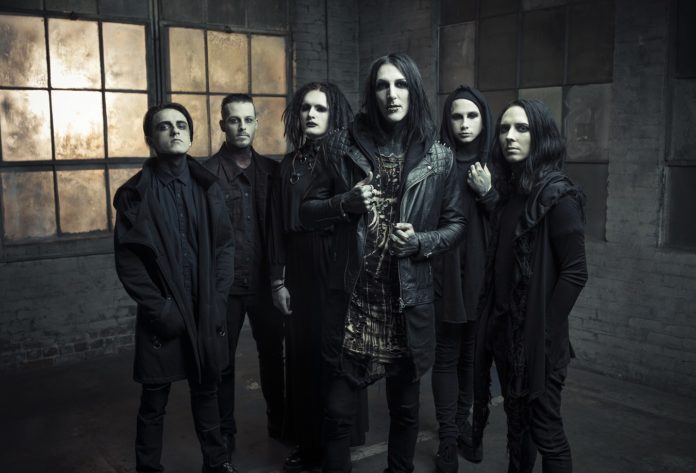 Motionless In White have announced that Josh Balz (keyboards, synthesizers, backing vocals) is departing from the band after 10 years.

“As of today, we regret to announce that after 10 years of time spent with the band, through the highest of highs and the lowest of lows, Josh Balz will be departing from Motionless In White,” said the band’s statement. “After many discussions and time spent searching within himself over the past year, Josh has come upon many discoveries of who he is as a person, and what is truly important to him regarding his future.”

Read more: “We’re just trying to do it right”—Motionless In White on new album due early 2017

Balz joined the band when he was 18 years old and began his work with the group in 2006 with their debut EP The Whorror and has been involved with every release since, including all three of their full length albums.

Motionless In White are gearing up to release a new album, called Graveyard Shift, early this year via Roadrunner Records. Their previous three releases were on Fearless Records. To design the artwork, fans were asked to submit designs up until last month.

Motionless In White are heading out on tour with Falling In Reverse and Issues this year. Check out the dates below.

MIW fans, As of today, we regret to announce that after 10 years of time spent with the band, through the highest of highs and lowest of lows, Josh Balz will be departing from Motionless In White.

After many discussions and time spent searching within himself over the past year, Josh has come upon many discoveries of who he now is as a person, and what is truly important to him regarding his future. We respect and whole heartedly understand his decision, and while we are sad to see him go, wish him nothing but great things in the future with his family and pursuing his new dreams and business endeavors. For more information from Josh directly, please visit his twitter @Joshbalz.

Regarding our touring schedule, we will be performing on the rapidly approaching “The End Is Here Tour” exactly as planned, now with a keyboardist to fill in. We will also be playing every show around the globe that we have announced thus far and continuing to tour strongly onward after what has previously been announced.

Regarding our new upcoming record, “Graveyard Shift”, everything is also still exactly as planned, and will be releasing this year on Roadrunner Records.

Thank you, Josh, for your years of dedication in helping MIW become something we only dreamt of being when the band started. It has truly been a pleasure to have shared the road with you and to have so many amazing stories and memories to look back on through it all. You will be missed.

Never did I think this day was going to come. It was 10 YEARS ago, a full decade, that I joined a group of friends who started a music project called Motionless in White. I was 16 years old and had the whole world ahead of me, and together with the guys we managed to explore a ton of it. It's crazy how fast time goes, and how much I've learned and grown over the past 10 years. I will never regret anything that has happened, and will forever cherish so much of this journey, especially all of the people and the dedicated fans I got to connect with along the way, but with that being said it is time for me to depart from Motionless In White. This year a lot has changed in my life from The Strange and Unusual growing immensely, to MIW signing to a major label, and a million other things that altered my life for both good and bad. Ive learned so much, and now understand on a new level what it is like to really experience life struggles, what is really important to me, and in this discovery and self reflection I've found myself. I've always been the one to go out and talk to and hangout with fans, as all of you know… but this past year I was honestly just hanging on because I felt I would let everyone down if I left. Im finally ready to refocus my time to worry about myself, and what I really want, and what makes me happy. And in that, I understand that it is time to stop being a part of MIW. It's funny how after all of these years, I feel MOST connected to our fans, and truly understand their struggles and connect with them more than ever. And with this realization, comes my exit. The bottom line is, you have to do what makes YOU happy. We all have one life to live, and we can't live it for anyone else. I know this news may disappoint some fans, but this isn't a bad thing. I've grown up with all of you, and this is just the next chapter for me!

I'm sure this will not be the the last you see of me in the music Industry, and you guys know where you can always find me! Keep staying strong and fearlessly following your dreams, wherever they may lead you. Thank you for the most amazing 10 years. Here's to the next chapter!

The End Is Here Tour Dates: