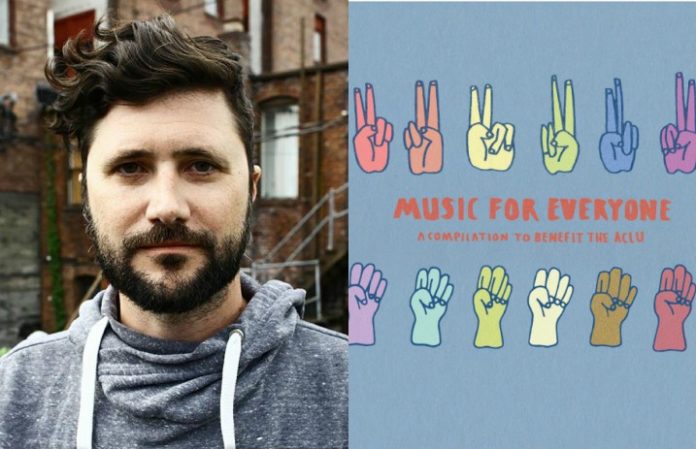 Like many people in America, the results of the 2016 election had Taking Back Sunday guitarist and co-vocalist John Nolan feeling helpless. So he wanted to find a way to support an organization that was going to fighting back against policies that would be put into place under Donald Trump's administration. That's when Nolan had the idea to create a compilation album filled with musicians who were feeling the same way. From Anti-Flag to Anthony Green, Nolan teamed up with 26 artists to make the Music For Everyone compilation benefiting the ACLU—grab it here. AP caught up with Nolan to discuss the inspiration for the compilation as well as an artist's role in speaking up about politics.

Read more: Taking Back Sunday and Every Time I Die announce tour

What was the inspiration for Music For Everyone and when did you think of doing it?
JOHN NOLAN: It wasn't too long after the election. I started to feel kind of helpless and I had spent a lot of time leading up to the election trying to engage with people on social media and talk about how I viewed things with the candidates and try to have some discussion. I think it's good, but I ultimately started to feel like it's not…there's only so much you can do by just talking about things or expressing opinions on the internet. I was trying to think of practical things to do.

Why did you decide that the ACLU was the best organization to do this for?
I thought about the ACLU, and it was pretty obvious to me based on the things Donald Trump had talked about that the ACLU was going to be playing a pretty vital role in fighting back against a lot of the things he wanted to do. I thought about a way to raise money to support them and that was the start of it.

Did you come up with the name?
We had trouble thinking of a name. I worked on it with Taking Back Sunday's manager, Jillian [Newman], and my friend Mike [Colleran] who runs Collective Confusion Records. We were discussing possible titles. I'm not sure who came up with the name, I think it might have been Mike, I don't think it was me. What we did discuss though is we wanted to have the name be something that was positive and not something that was really negative. We didn't want it to be something that would turn people off to it just by the name.

Why do you think we need self-expression through music now more than ever?
I think that it does two things that are really important. For a songwriter expressing themselves, it's an outlet, it's a way to kind of tap into feelings and ideas and frustrations that are sometimes hard to put into words or hard to express in any other way. I think that writing songs can get something out of you and lift a weight off of you that just talking about something can't. I think that the other thing it does for people listening to it that it can have the same effect on the person listening to it. I think there can be sort of a cathartic feeling from it or something that lifts some weight off you from just listening to it.

What were other artists' reactions when you asked them to be part of the album?
We ended up with a ton of artists, everyone who's on it was immediately like yes, there was no hesitation. I think a lot of people had the feeling that they want to do something and support something that's going to make a difference. It was a lot of immediately excited people!

Was there anyone you were really excited about joining the compilation?
Everybody who joined it was incredibly exciting to see it all coming together because we had no idea what to expect. To see it coming to the point where we had to be like I don't know if we can put any more songs on this because it's getting a little crazy was really great. There are a few that really stood out like Anti-Flag getting involved was really big because they really carry a lot of weight and bring an extra level of attention to it. I was very excited that they were willing to get involved with it. I was really excited that Walter Schreifels [Youth of Today, Gorilla Biscuits] was into it. I've seen him and kind of known him over the years a little bit, but I didn't know him well enough to know if it was something he'd be interested in when I contacted him. Anthony Green was great. We had just toured with him last summer so I kind of had a feeling where he might be at with this and that he might be into it. He was one of the first people I contacted right when I had the idea. As soon as I sent it he was like, “Yes, I'm in!” There are so many, those are some of the ones that come off the top of my head.

What can you tell fans about Taking Back Sunday's song, “Just A Man”?
It's an acoustic-based song. It's not a full band and a little stripped down compared to the stuff we've done before. I think the direction is a little different than what people might be used to but I think that's part of the cool thing about doing the comp and not having a song fit in with any other song on the album—it can stand on its own as a unique kind of thing. We did things a little differently. I'm excited about it and I hope people like it.

How was it collaborating with James from The Get Up Kids?
That was awesome! That was another thing that just came together pretty quickly and naturally. I had gotten in touch with him to see if he wanted to do something on his own and he was like, “I don't have anything right now that I could give you. I have a bunch of ideas and some music for songs, but I don't have anything finished that I could get recorded before you need it.” So, I was like, “Well, if you have music just send something over and I'll see if I can work with it and we can put together a song.” So, he did and it really came together very quickly and naturally. It was really fun to work on it with him, we did it all through email. It would have been more fun to do it in real life. It was a really cool experience.

TBS also did a song with Gift of Gab, was that the same process?
Yeah, that was all over email. Our drummer, Mark [O'Connell], he has been putting these songs together that he mostly does on his computer at home and on his iPhone. It's mostly like drum beats and samples and keyboards. We had been working on a lot of songs that were based off that on our last album. Gift of Gab got in touch with our publicist and expressed interest and said he'd do a song if anyone has any tracks to send. So we sent it over and he sent it back with vocals over it.

Do you have any advice for fans who want to get involved with either the ACLU or another organization?
Going out and doing some research into the organizations that are working different causes is important. Think about what you want to support, what's important to you and actively go out and do some research and find out who's fighting for those causes. That's the main thing. Go and find someone you believe in. There are all kinds of things you can do. Whether it's donating money or time. I think that's really important right now.

Some artists have been criticized for speaking out on Trump and speaking up about politics, why shouldn't artists keep quiet?
If it's something that genuinely is important to you and meaningful in your life I don't think there's any reason to be quiet about anything. Whether it's politics or something in your personal life. I think that's kind of our job. I don't look at it as the artists' job to influence politics or change people's opinions about anything but our job is to express what we think and feel. I don't see any reason if what you're feeling and thinking is of a political nature you should be quiet. It's just part of what you do as a songwriter.

Do you think future TBS music will reflect what's going on in the U.S. over the next four years?
I'm not sure, it's kind of hard to say. In the past, it's something we've tended to shy away from or if we do get into it make it a little more coded or metaphorical or something. With the last record, we started to test the waters. There was nothing super overtly political. There are some songs that are political in nature and it was our first test in how that would go. We'll just have to see on the next album, it has to happen organically. It's nothing we're going to fight against or try not to do.

What would you say to fans who are feeling helpless right now with the current US administration?
I think like I said, going out and searching for organizations that are working for causes you support is very important. That's something you can do that can actively make a difference. It's also important to remember that, hopefully, this is only going to be four years. Also, by getting involved in voting and getting other people involved in voting you can actively work toward other people in office—locally or at the top as the president. In the big scheme of things, this administration's time could be very short and will be a blip on the overall radar. I think that takes people getting involved and voting and supporting groups that are working for the things they believe in.